Steven Lingenfelter, the owner and chef of Illegal Food, is an unlikely ambassador for Japanese food. He’s never been to Japan, and he grew up eating “meat and potatoes.” But his version of okonomiyaki, a savory Japanese pancake, is one of Atlanta’s most-well known dishes. “My wife and I enjoy the traditional okonomiyaki,” Lingenfelter says, “And since we decided we were putting fries on the menu, we wanted to put everything on it and make it as approachable as possible.”

His first attempts at the dish were toned-down takes on the Osakan classic. “We just used to do some of the (okonomiyaki) sauce, sesame seeds, and seaweed,” he says. It wasn’t until he met Sean Higashida, a chef at the Buford Highway Farmer’s Market, that the dish became a fully realized take on okonomiyaki. Higashida, a native of Osaka, showed Lingenfelter techniques and traditional ingredients found in the pancake. Soon, a few splashes of Japanese flavor became a carefully orchestrated symphony of rich Japanese mayonnaise, spicy fermented chili sauce, seaweed, pickled ginger, and okonomiyaki sauce. Lingenfelter garnishes the whole thing with thin bonito flakes.

He debuted the dish when he opened his pop-up restaurant in April 2013 in the back of Joystick Gamebar. They were an instant hit then—and still are now at his restaurant in Virginia-Highland. Lingenfelter says he goes through more than 1,200 pounds of potatoes every month and estimates that he sells upwards of 200 orders a week. 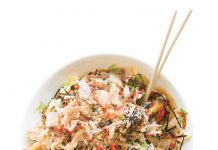