For nearly 35 years, the cheesesteak recipe at Woody’s CheeseSteaks went virtually unchanged after opening in 1975 at the edge of an intersection on Monroe in Midtown. Unchanged that is, until Steven Renner and Matthew Porcelli took over in 2010. “The old owner put ketchup and mustard, standard, on it,” Porcelli says. “He really made it what it is. But we had to tweak it a tad to make it meet our standards.”

The first, and arguably most important change, concerned the bread, which they started sourcing from New Jersey’s Liscio’s Bakery, a well-known supplier to Philly’s best cheesesteaks. Then they added more meat and cheese and made the ketchup and mustard optional. The new cheesesteak, with its soft roll, peppery steak, sweet grilled onions, and gooey American cheese, was a more faithful version of the Philadelphia classic. The recipe was mostly met with praise, but a few of the old customers needed help adjusting to the changes. One in particular came to Porcelli asking for steak sauce, claiming that the old owners would indulge him whenever he asked. Not wanting to argue, Porcelli made a batch to test. “That was five years ago,” Porcelli says. “We make it by the gallon now.”

The sauce, which is now Porcelli’s secret recipe, was a hit, and bottles are often stolen by late night customers. “We’re missing a bottle of the sauce on a weekly basis.”

The 180 square-foot kitchen serves more than 2000 sandwiches a week, selling more than 2 tons of meat and 800 pounds of cheese in a single month. “When I first started, I thought a lot of it was location. But it didn’t take long for me to realize that people are so loyal to it because people crave the food,” Porcelli says. 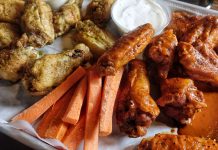 Stop everything. These are the best wings in metro Atlanta.