On Friday evening Storico Fresco, the back-to-the-future pasta shop in Buckhead, held its first popup event. Owner Michael Patrick conceived of the new dinner series as a more immediate and intimate way to introduce pasta fans to regional, often obscure Italian dishes—his abiding obsession. He partnered with chef David Kanter, an alum of New York’s Le Bernardin who was classmates with Eli Kirshtein at the Culinary Institute of America, to execute the meal while Patrick discussed the origin of the dishes with guests.

Patrick has more specifically themed dinners planned for the weeks and months ahead; this first one grouped together some of his favorites from around Italy.The meal, especially the centerpiece pasta courses, counts among the finest I’ve had so far in 2013. (It totaled $150 per person for seven-courses, including spot-on Italian wines: Patrick was a sommelier in a past professional life.) I thought a few highlights, even from grainy iPhone pics, were worth sharing.

Twenty or so diners gathered at the shop, which has just the right industrial-hip factor for a popup.

First pasta course: squid ink tortelloni stuffed with smoked salmon, ricotta, and Parmesan. Patrick loves ancient pasta recipes but said this one was more of a modern take inspired from the Amalfi/Ligurian western coastal regions, and the filling debunks the myth that Italians never pair seafood and dairy.

Next up was sugo bianco with garganelli, a tubular pasta from the central Marche region in a surprisingly subtle sauce of ground turkey (traditionally it’s made with capon, but that fowl proved hard to find last minute) simmered with nutmeg, cinnamon, milk, and a splash of pinot bianco.

Casonsei, an old recipe from the valleys of Bergamo in Lombardy, is one of Patrick’s most popular pastas, and he’s always telling customers to serve it with shavings of lardo (cured fatback). Since I don’t, um, keep a stash of lardo in the fridge, I usually gloss it with browned butter and pine nuts (Patrick’s alternate suggestion), so I was glad to finally try the pairing. The porky flavor melts away on the tongue, followed by the earthiness of the beets and smoked ricotta in the pasta. Awesome.

The meat course (which preceded a lovely ricotta pound cake with strawberries and cream) was petti di vitello ripieno—veal breast enriched with a date puree.

The next dinner, likely in early June, will focus on the Jewish-Italian cuisine that stemmed from the Roman ghettos. Patrick is also plotting a vegetarian feast. Email m.patrick@storicofresco.com to receive mailing list updates on the dinners and the ever-changing lineup of pastas in the store. 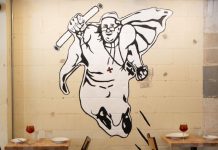 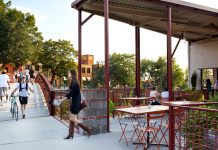 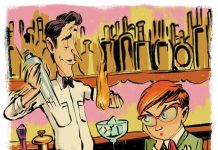