Home Restaurants Gio’s Chicken Amalfitano not open quite yet 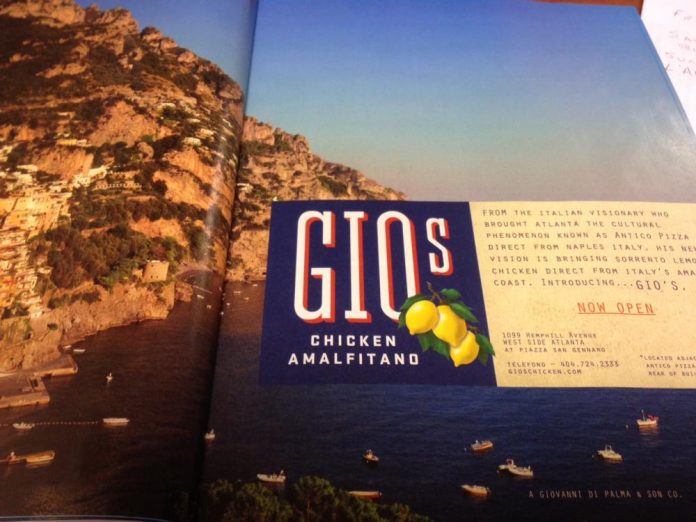 At the end of November, Giovanni Di Palma will open his second restaurant in Atlanta, Gio’s Chicken Amalfitano. Di Palma’s first restaurant, Antico Pizza, has been a genuine phenomenon in Atlanta’s dining scene. Gio’s is the first step in an ambitious piazza-styled development that Di Palma has planned for the area immediately surrounding Antico. We figure it’s going to be a big deal. Here’s the general idea via press release:

“Gio’s will offer signture Italian chicken dishes like the world-famous Sorrento Lemon Chicken, highlighting flavors typical of the Amalfi Coast area around Naples, Italy. Like Antico, Gio’s will open as a small takeout operation and expand organically as the demand grows.

The simplicity of Gio’s continues with the menu of five signature chicken dishes – plus a few rotating and seasonal offerings – available to-go in individual and family-style sizes, served with roasted potatoes and homemade focaccia. Other offerings include chicken soup, baked ziti and ricotta cheesecake.”

Gio’s also happens to have a gorgeous two page spread advertisement in the December issue of Atlanta, which is just now reaching our subscribers. It’s not the sort of thing that I would normally mention, because journalists like myself tend to treat the line between advertising and editorial like the separation of church and state. It has come to my attention that this beautiful advertisement is emblazoned with the words “NOW OPEN” in bright red print.

Gio’s Chicken Amalfitano is actually not open. Like I said before, they’ll be open at the end of November. Apparently, the phone number in the advertisement is the phone number at Antico and it’s currently ringing off the hook with customers trying to get Di Palma’s chicken. Oops. People, please try to contain your excitement about Gio’s Chicken until the end of November. Then you can call 404-347-3874 and have all of the Italian chicken you desire.