The former location of Chef Liu was one of the great eccentric restaurant venues in Atlanta, a Northern Chinese restaurant that focused on dumplings shacked up in a former Baskin-Robbins outpost in the middle of Pinetree Plaza. I remember getting ice cream at that odd rectangular space in 1995 after a meal at Happy Valley. Chef Liu’s kitchen was cramped, which probably made for short tempers: When I reviewed the restaurant for Creative Loafing in 2005, I remember the staff shouting at each other during more than one visit.

I hadn’t been to Chef Liu since returning to Atlanta in January, and so I sped over not long after the restaurant relocated itself to the former Asam House spot across the strip mall’s stretch of asphalt. Honestly, that first meal was fine, but not as good as I had remembered it from prior years.

I returned this week, and it was a worthy reminder—in these days when food lovers and food writers descend on restaurants and pronounce judgments the moment they open—to check back once the restaurant has better established its rhythm. Much had improved, particularly the soup dumplings.

The space is very straightforward, though much less drafty than the former Chef Liu. Said dumplings on the second visit: Plump, steamy, much more delicate, and full of broth (but they look lighter only because I sat at a table with better lighting the second round). Excellent cold weather food. The menu seems to have grown, though I stuck mostly to classics—breakfast items such as the twisted cruller (so hot we could barely touch them) with sweet soy milk; Taiwanese bun with pork and sour vegetables (a new item, I believe), which was like an Asian breakfast sandwich), garlic bacon, and of course, dumplings. Juicy lamb dumplings stood out from the rest—the meat’s heartiness stands up to the thick, wheaty Northern-style dumpling dough. The leek pie, on the first visit, tasted like old cooking oil. It was brilliant this visit—the bits of egg inside were fluffy, not rubbery, and the glass noodles had some bite. Overall, I’m liking the view from Chef Liu’s new digs better and better. (No sign yet, by the way, of who might inhabit the free-floating building. It still looks like it did the day I watched the staff lugging refrigerators over to the new space.) 5283 Buford Highway, Doraville, 770-936-0532. 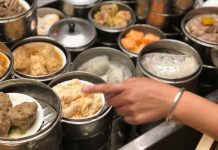