Thud. That’s what it sounds like when the sturdy plate holding that glorious mess hits your Formica table. The sea of sausage gravy that surrounds the open-faced sandwich adds heft. Thud. It’s the sound of promise, as if, in that one beat, the Comfy assures you that tomorrow is a new day. “Until then,” it seems to say, “curl up in this blanket.”

Underneath, three fried pieces of boneless chicken breast somehow maintain their crunch. The biscuit does double duty as a gravy sponge and a support for the bird, but it’s nothing all that special on its own. (According to one insider, diners can request a “Comfy Mini,” which is a half order. I don’t know why anyone would ever do this.) The only other item on the plate is an orange slice or two. Why? That puny half moon couldn’t begin to cut through the Comfy’s richness. Perhaps the orange is there to offer up a few vitamins? I like to believe it has a voice of its own, telling me, “Don’t worry. You deserve every morsel of sausage that lies before you.”

When Home Grown opened along a vacant stretch of Memorial Drive in 2010, the Comfy Chicken Biscuit was a “quick and easy” staff meal, according to chef and co-owner Kevin Clark. He added it to the restaurant menu about a year later. “I thought the kitchen was going to walk out,” Clark told Atlanta magazine in 2016. “Every single ticket had the Comfy on it. It was ridiculous.”

You could make your own Comfy at home. Atlanta-based meal-kit delivery service PeachDish offers “Kevin Clark’s Comfy Chicken Kit” for $24.99. But you’d miss out on the company of all kinds of folks—construction workers, pink-cheeked babies and their preppy parents, middle-aged punks with Falcons-red mohawks. One of the best parts of the Comfy is the weird, inclusive, against-the-odds establishment from which it was born. Home Grown is a lot like Atlanta in that way. 968 Memorial Drive, 404-222-0455 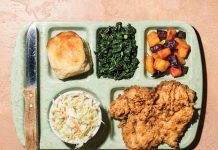 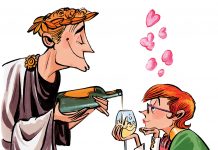 The Christiane Chronicles: For the love of wine varietals