Sandeep Kothary, owner of Tabla in Midtown, is opening a new restaurant next summer in Inman Park at 870 Inman Village Parkway. The 3,700-square-foot restaurant (yet to be named) will serve “modern American fare with an Indian twist,” plus a full bar with local beer, small production wines, and craft cocktails. “I’ve been doing traditional Indian for almost 25 years now, and I wanted to branch out,” Kothary says. “At Tabla, we’ve been able to experiment and do a few things outside the realm of traditional Indian, and we’ve had a good response.”

He’s not ready to reveal his chef but says he’s working with someone outside of Atlanta who is both classically trained and has experience with Indian food. Appetizers may include smoked chicken samosa with greenmarket leek and radish raita and Hyderabadi spices, and marinated sweet Maine shrimp with coconut water, green mango, lime, and ginger. Entrees include pan-roasted sea scallops with local cauliflower, purple potatoes, green mango, and sauce caldin, and sweet spice-braised oxtail Bombay with tapioca pilaf and braised local greens. There will be a rotating three- or five-course tasting menu as well. Many items will be vegetarian, vegan, or gluten-free. Entrees will range from $14 to $27. “It’s not soup-y, curry, or scary. It’s not too hot or spicy. It’ll be much more approachable to the general public,” Kothary says.

The craft cocktails will also incorporate Indian spices (e.g. caraway-infused rye). The wine list will be heavy on German Rieslings and Sauvignon Blanc from Australia, which, he says, pair better with Indian flavors than heavy reds. The approximately 150-seat restaurant will include an open kitchen, a full bar, and a patio. 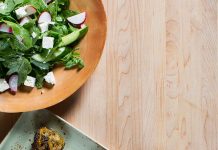