Though it opened in the lead-up to Halloween 2022, Mambo Zombi is definitely not a Halloween bar. Despite the mai tai and Singapore sling on the menu, it’s not a tiki bar. Also, if you’re looking for it—you’re right, there’s no sign. But it’s also not a speakeasy.

Located on the second floor of Georgia Beer Garden, this low-key, 50-seat lounge is a welcome respite from the race-car energy of the Edgewood Avenue corridor below. You’ll have to step through a coffin to enter, but when you do, you’re transported to a high-quality cocktail bar that mixes and highlights the best of South American, Afro-Caribbean, and West Indian cultures. “Even though people ask what’s the vibe and it feels like it’s a lot of things, all those things are kind of connected—whether it’s certain flavors, or rums, tequila, and mezcal,” says managing partner Kysha Cyrus.

Opened by Cyrus and Joystick Gamebar proprietors Johnny Martinez and Brandon Ley, the bar was created to be a celebration of life, with interior stylings inspired by Day of the Dead aesthetics. Ley and Martinez handle the quirks—like the creepy Island of the Dolls restroom—while veteran bartender Cyrus crafts the cocktail menu. “We’ve known each other long enough that they just kind of trust what’s gonna go down,” says Cyrus.

Cyrus came of age during Atlanta’s cocktail revival but has floated under the radar in the bar scene. After stints at Emeril’s and Repast, she met Ley at Serpas before he and Martinez opened Joystick, where Cyrus would go on to manage the bar program. Across the street from Joystick, Ley and Martinez also own Georgia Beer Garden, whose top floor they repurposed during the pandemic for a temporary bar. After deciding to make that bar permanent, they brought Cyrus on as a partner, and the three planned out what would become Mambo Zombi.

The menu is littered with modern classics like the 1950s Harvey Wallbanger, a screwdriver relative that incorporates the Italian herbal liqueur Galliano. And then there are drinks that could become modern classics—including the Elote, with rum, housemade corn milk, and condensed milk; the Monkey See, a savory, rum-and-amaro cocktail that sips like a Manhattan; and the tiki-inspired Monkey Screwed, with banana-infused rum, coconut milk, banana syrup, and . . . fire.

Tucked in the corner, a sugarcane press extracts juice from the bushel of sugarcane propped up on the bar; it’s mixed into drinks like the Madam Gorgeous, with aged cachaça (a Brazilian sugarcane spirit) and fresh lime juice. Nonalcoholic options include aguas frescas, chicha morada (a Peruvian drink made from purple corn, fruit, and spices), and the Mexican fermented-pineapple beverage tepache. “My philosophy is ‘As long as it’s delicious,’” says Cyrus. “That’s everybody’s philosophy, I’m sure, but I just always keep it simple. If it’s great and not too overworked, that’s where I live. I love to make things that seem like they could be basic, but they have these ingredients that some people may have never heard of or don’t really get to taste a lot of.” In the works: mezcal and tequila flights with flavored-salt pairings.

A neon sign was, at press time, also in the offing; meanwhile, a Sharpie-scrawled sign on the lighted ball outside Georgia Beer Garden pointed the way. “We’re here,” says Cyrus. “I’m just glad to be a weird safe haven for people. You’ve reached the other side.” 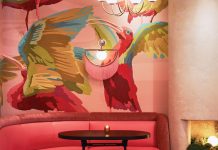 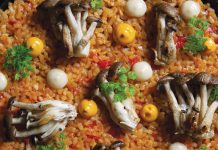