Home Uncategorized There’s a movement in Georgia to modernize mead

A growing thirst for mead is keeping the bees in north Georgia busier than usual. “We’ve gone through 6,000 pounds of honey since we opened,” says Blair Housley, who launched Etowah Meadery in Dahlonega last November. “It’s like Kool-Aid for adults.”

Housley and other Georgia meadmakers are looking to elevate the fermented honey wine from an archaic novelty to a beverage as buzzworthy as cider or even craft beer. At least five meaderies now serve north Georgia; longtime beekeepers at a sixth, Allison’s Honey, are in the development phase. Of these, Etowah is the largest, with the most varieties of mead—20 and counting, including blueberry, currant, and chocolate raspberry.

“We face two challenges,” says Housley, who studied at the UC Davis Honey and Pollination Center in California. “People either don’t know what it is, or they’ve had a bad experience with it, like something sickly sweet made in someone’s bathtub or served at a Renaissance festival.” (Artisanal meadmakers look askance at the Ren Fest.)

Considered the world’s oldest alcoholic beverage, mead is believed to have been produced 40,000 years ago, and archaeological evidence of it has been found on every continent except Antarctica. The Queen of Sheba reputedly gave King Solomon mead, and rowdy Vikings quaffed it in Beowulf, the oldest surviving epic poem in Old English. Contemporary tipplers know mead from Game of Thrones, Harry Potter, and The Lord of the Rings.

The owners of Viking Alchemist Meadery in Marietta are also inspired by the beverage’s history. “I discovered mead as a drink of the Middle Ages through the Society for Creative Anachronism,” says co-owner Robin Kosoris, whose products are available at Whole Foods and most of Atlanta’s larger package stores and growler shops—and who plans to meet increased demand by moving to a larger facility. “My aim is to make mead a mainstream beverage that people drink as easily as they do a white wine.”

Many meadmakers entered the field by brewing beer. “Georgia’s beer selection was just so dismal in the early 2000s that I started making my own,” Schoendorf says. “In the back of every beer book, there’s a chapter on mead. So, I began to experiment.”

Tom Dilbeck, owner of BeeCraft Mead Company in Dawsonville, recalls the difficulty of getting his recipe right in the early days, before he opened his doors commercially last year. “About 15 years ago, when we first started, we didn’t do so well in competitions,” he says. “One judge said our mead tasted like salad dressing. However, practice and a little scientific method made perfect.”

Dilbeck says every bottle of his craft mead is the work of an average 1,300 bees that visited one million blossoms. He even trademarked the phrase “a million blooms in every bottle.” The flowers the honeybees visit should be free of pesticides, he advises, “which is why we have some bees next to the Chattahoochee National Forest.” He notes that when the mead is just right, “you get the aroma of the flowers when you sip it.”

The family members that run Southern Origin Meadery in Canon raise their own bees, which are transported from place to place to capture varying blooms. “In June, we move our hives to north of Clarkesville in time for sourwood blossoms, which produce a super-light honey for our mead,” says co-owner Brianna Brown-Kidd.

All of the meaderies offer tastings, which cost roughly $10 and allow visitors to sample a range of flavors and intensities. Mead is typically equivalent in alcohol content to wine. And, like wine, it can be paired with food.

“I’d use our sweet peach with barbecue,” says Housley, “and our blueberry for hamburgers. The darker the food, the darker the mead, like wine.” 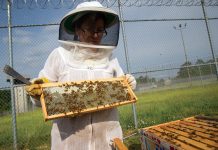 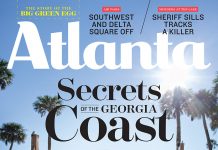