It’s hard to miss Rightside Brewing’s colorful packaging. The royal blue and sunshine yellow cans with a sunburst logo practically leap off the shelves at Tower liquor store in Buckhead. While sipping the crisp citrus wheat, best enjoyed with an orange slice garnish, it’s easy to forget that there’s no alcohol.

Rightside released two nonalcoholic beers in January: the citrus wheat and an India pale ale. Founder Emree Woods got the idea for the business in 2017, when, while pregnant with her daughter, she wasn’t able to find a satisfying nonalcoholic replacement for her favorite beer. She recalls a time that she and her husband went into a package store and saw the person checking out in front of them buying three cases of O’Doul’s.

“I just set out to create something that tasted really good, that gave people who weren’t drinking an option that made them feel like it was a treat,” she says.

Woods contracted with Big Kettle Brewers in Lawrenceville to execute the alcohol-free drink she envisioned. The facility (that also owns and shares space with Lawrenceville’s Ironshield Brewing) brews beer for brands all over the country, but co-owner and master brewer Glen Sprouse was hesitant when Woods first approached him.

“We don’t typically work with startups because there’s a long road from starting up to actually getting product on the shelf, and we discovered a lot of startups hadn’t done their homework yet,” says Sprouse. But Woods had everything planned out, from the artwork to the technology she wanted to use.

Rightside’s product is made through reverse-osmosis filtration. Big Kettle brews a beer the way it normally would, then runs it through a filtration system that removes the alcohol. The brewers add some water to increase the volume and a little lactose (un-fermentable milk sugar) that adds body while making the drink a little sweeter. “When we’re done, we still have a beer product that’s pretty pristine. And it’s amazingly similar to the beer that it came from,” says Sprouse. There is still about a .5 percent alcohol by volume when using this method, which is worth noting if you’re trying to completely avoid alcohol.

While buzz-less brews have been trending across the country, don’t expect to see many Atlanta craft breweries catching on anytime soon. Monday Night Brewing has made a low-ABV beer last year, but says it doesn’t have plans to produce a nonalcoholic one. SweetWater Brewing, which was purchased by cannabis company Aphria in November, plans to eventually make nonalcoholic beverages, but not necessarily in the style of beer.

Why the reluctance? It’s a juice-squeeze issue. Reverse osmosis is considered the best method of producing the beverage, but it’s expensive, says Jason Santamaria, owner of Second Self Beer Company in West Midtown. “It’s not going to really taste like beer, and there’s no alcohol. So it doesn’t seem very interesting to me,” he says. For now, he’s focused on his CBD sparkling water brand, Cirrus.

“I see CBD beverages as an alternative [to alcohol] because there are proven health benefits of CBD hemp beverages,” says Santamaria. “So it is a healthy thing to put in your body.” He figures if you can’t have the booze anyway, why not forgo the calories and drink something that could have a wellness benefit. What makes beer interesting, he says, is how the flavors interact—and many nonalcoholic beers just don’t deliver.

But now that Rightside is available, and seemingly Atlanta’s only locally-brewed nonalcoholic beer option, some critics are impressed. “I’m so surprised by it. It’s actually really delicious,” says Caroline King, founder and host of Bitch Beer Podcast. “It’s refreshing. It’s got this really nice citrus note to it. It’s almost like a hoppy LaCroix, if that makes sense.”

Atlantans looking to purchase Rightside and other suds sans alcohol most likely have to find them at liquor stores like Tower and H&F Bottle Shop. Tower also carries Brooklyn Brewery’s Special Effects, German brand Clausthaler, and the nonalcoholic version of Lagunitas.

Launching during a pandemic hasn’t been ideal, but Woods says she’s been pleasantly surprised by the response. “There are so many reasons that people are making more mindful decisions around their consumption of alcohol. And that’s what I want Rightside to be, just an option for people that want [an alternative]. Something that you can do and makes you feel good and healthier,” she says.

She’s already won over a tough critic. Sprouse, the master brewer at Big Kettle, is a self-described old-school German lager drinker. “I found myself in the middle of a packaging run, and before it was over, I had pounded three of her beers and realized, this is fantastic,” he laughs. 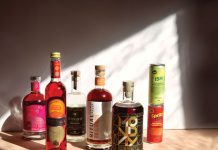