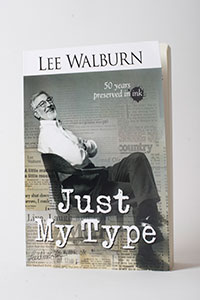 Once every few months I have lunch with Lee Walburn, who was editor in chief of this magazine for fifteen years. We usually meet in Marietta, which is sort of halfway for both of us. Lee and his wife live in Armuchee now, just north of Rome—far beyond even the metro Atlanta exurbs. Lee is always giving me grief that in the five years I’ve been editor, I still haven’t made the drive up to his farm, a place that coworkers and friends describe as magical, which may or may not have something to do with the fine bourbon I’m told he has on hand. “Lee,” I said during our most recent conversation, “I have two boys. One is three and the other is almost two. You understand what you’re getting yourself into? Believe me, it’s fine to say no.” “What are you talking about?” he replied. “You think we want to see you?”

I never worked for Lee, but I know plenty of people who did. Here are some descriptors I’ve heard: Awesome editor . . . Terrifying . . . Iconoclastic . . . An old softie . . . Fiercely loyal . . . One mean S.O.B. Shouting matches between him and a former publisher here are the stuff of legend. This is a business that attracts and frankly demands big egos, and Lee, who can be as gregarious and avuncular as Santa Claus when he wants to be, has a healthy one. As editor, he approached each issue with a philosophy as simple to understand as it is maddeningly difficult to execute: “Make ’em laugh, make ’em cry, make ’em smarter.” Along the way, he brought aboard some of the best magazine writers this city—heck, this country—has ever known, recognizing in them potential that perhaps even they didn’t see in themselves. I’m thinking of people like Tom Junod, Candice Dyer, Luke Dittrich. “The greatest joy that I ever had as an editor was seeing people go on to do great things,” he told me.

Lee’s imprint on the magazine’s DNA was indelible. His successors are inevitably measured against him. I’m happy to take the challenge, but there’s one area in which I know I’ll fall short. Lee Walburn is not just a hell of an editor, but he’s a hell of a writer. Last fall, at the age of seventy-six, he put out his first book, Just My Type, a collection of his writing that stretches back to the 1970s, spanning his time not just as editor here but also when he worked at the Atlanta Journal-Constitution, up to his current gig as weekly columnist for the Rome News-Tribune. Here’s a profile of Hank Aaron. There’s a piece on the KKK. All told, there are eighty-four stories, essays, columns. Together they tell the tale not just of an evolving writer but an evolving city, an evolving state.

Perhaps the best part of this book is the cause it serves: Cancer Navigators, a nonprofit in Rome that gives practical aid and spiritual comfort to those who’ve been diagnosed and to their families. Besides sitting on the board, Lee is a cancer survivor himself, so the cause has special resonance. “I’m just overwhelmed with gratitude for what they do,” he said. One donor picked up all the book’s printing costs, meaning 100 percent of the sales go directly to Cancer Navigators. In just two weeks, he told me, book sales raised $15,000 for the nonprofit.

Lee wondered aloud how many Atlanta magazine readers remember him. My guess is many do. This book is a remarkable testament to a life devoted to stories—not of the news, per se, but, as Lee says, of “the people who live with the ramifications of the news.” Which is just one reason these stories feel as fresh as ever.

To buy Lee’s book, go to cancernavigatorsga.org/walburn-book or call 706-295-4119. All proceeds go to Cancer Navigators.