Mike Cote is the president and CEO of Secureworks, an information security services company and Dell Technologies subsidiary, and has been leading the defense of highly sensitive data for nearly 20 years. “This is a complex problem and unlike anything else,” Cote says. “People are using technology and social engineering to steal money, data, intellectual property, etc. The hard reality is that there’s not a single piece of tech that will prevent cyberattacks.”

Cote came into Secureworks in 2002, when the company was facing the end of its cash reserves. He shifted focus to large business clients, which saved the company and ultimately led to its acquisition by Dell in 2011. The best way to fight cybercrime is through prevention, he explains. “We see companies that are vulnerable because they are not coordinating technology, people, and business processes in a way that closes the gaps and triggers the right actions when threats do get in,” he says. His team also strives to understand what motivates hackers and what tricks they’re using to infiltrate systems.

Earlier this year, Secureworks came to the aid of the City of Atlanta when it was paralyzed by ransomware, software that locks down computer systems until a ransom is paid. The company was able to identify the strain of malware affecting the network and helped with recovery efforts. “All incident response engagements, especially ones involving ransomware, are an intense experience,” Cote says. “There is time pressure with a fuse or deadline, people work very long hours, and each decision or action taken is critical and may have long-lasting implications. Leadership, organization, and experience are important.” 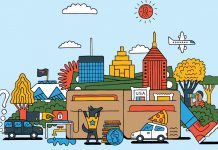 We billed this city: $1,825 for pizza and other curious findings from Atlanta’s new spending transparency database