Adjacent to Pinewood Studios (the country’s largest studio complex outside Hollywood), the mini-city is beginning to rise across 264 rural acres. Plans call for 1,400 residences, most of them designed by Oliver. Larger estates will cost north of $1 million, but it’s the microcottages—between roughly 500 and 1,700 square feet, with prices beginning in the upper $200,000s—that excite Oliver most.

A dense land plan with housing styles ranging from Hollywood Regency to English Renaissance, Nordic, and Scottish Arts and Crafts will evoke the coziness of European villages. Most homes will feature front courtyards overlooking parks (about half the acreage will be converted to public greenspaces) instead of roads. Each will be thermal-powered, eliminating the unsightly presence (and noise) of air-conditioning units. Oliver said the goal is to attract a blend of upstart millennials and empty nesters, avoiding “a monoculture of incomes or ages.”

Raised in South Georgia’s tiny Cairo, Oliver is still inspired by boyhood family trips to Savannah and pedestrian-friendly European cities. He studied architecture at Georgia Tech and twice failed as a developer before finding his footing with ecofriendly projects such as Glenwood Park and Serenbe (where he designed about 50 homes). In Roswell his townhouses and cottages eschewed cookie-cutter mixed-use and are credited with helping forge the city’s reputation as a walkable hub.

To an extent, Pinewood Forrest will echo Oliver’s previous designs, only with a tighter, more urbanized fabric.

“It’s a wonderful new world right now in metro Atlanta, with the awareness of these housing types that are just so much more sustainable and rewarding,” he says. “It makes for beautiful urbanism.” 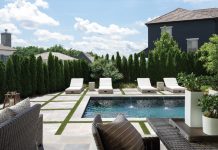