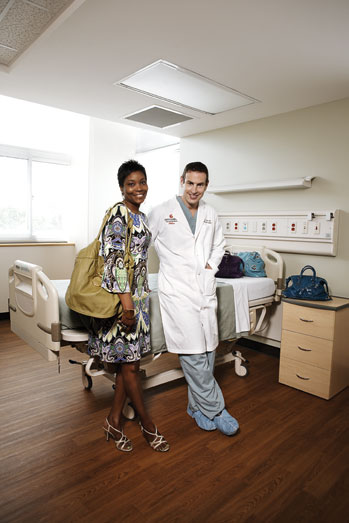 Breast cancer was just Yolanda Mitchell’s first bad news. A decade ago at age thirty, the part-time model and boutique owner endured a mastectomy and monstrous doses of chemotherapy and radiation.

“It’s been all downhill from there,” says the surprisingly cheerful Mitchell, as she ticks off a laundry list of the procedures and diagnoses she began to face.

At a five-year post-surgical checkup, a lump appeared on her arm as the nurse drew blood. The bulge grew. A biopsy revealed that this time there was cancer in her muscle tissue. Treatment included two additional surgeries.

Her attitude remained upbeat even through more fibroids and a hysterectomy. Doctors wanted to amputate her arm, but she refused and fought to regain use of the once-lifeless limb.

At age thirty-eight, Mitchell was cancer free, but she developed a relentless cough and became so tired she couldn’t get out of bed. A trip to the emergency room revealed the worst news yet: Her heart was failing, most likely from all those intensive chemotherapy treatments.

“I just thought I needed a different kind of vitamin,” she says. “I thought never in a million years that I could now have problems with my heart.”

The strong medicines made her constantly sick. She was in and out of the hospital for weeks at a time, and she was put on the heart transplant waiting list. Doctors tried several procedures, such as placing a cardiac balloon pump, but nothing worked. With her heart functioning at 8 percent capacity, she couldn’t even walk.

Cardiologists at Saint Joseph’s Hospital suggested implanting a HeartMate II ventricular assist device, essentially a battery-powered mechanical pump, to do the work of her failing left ventricle. This would require dangerous open-heart surgery, but Mitchell had no alternative. “The options were either that or she would die,” says cardiologist John B. O’Connell, executive director of Saint Joseph’s Heart Failure Program and part of Mitchell’s medical team. “She didn’t bat an eye about it. She looked it up on the Internet and said, ‘Let’s go for it.’”

Mitchell had the VAD implanted in March 2009 and was on a ventilator for nine days after the difficult surgery. But she brushes off the direness of her situation. “According to doctors, I should’ve been dead a long time ago. This has been a miracle,” she says.

Still on the transplant list, Mitchell has been called for donor hearts three times—once on July 4, another time on Thanksgiving—but the hearts weren’t a match. She’s hoping that the fourth time will be the charm.

Until then, O’Connell says the VAD should last at least five years. If Mitchell doesn’t have a new heart by then, she can replace it. In the meantime, Mitchell must constantly haul around two five-pound batteries, one connected by wires to the internal pump and the other for recharging and backup. After only a day of wearing the manufacturer’s ugly fanny pack, the fashionista took an awl to one of her old handbags. Soon she was wearing designer shoulder bags wherever she went—Michael Kors, Louis Vuitton, Gucci. Her sow’s-ear-to-silk-purse approach has made her Saint Joseph’s poster child for life with a VAD.

“I still live my life exactly the same. I have fun. You would never know I was sick unless I told you,” she says. Mitchell visits other patients who are considering getting the device. She’s armed with a pacemaker, defibrillator, the VAD, and an incredible outlook.

“It is such an intangible benefit for a patient to have that kind of attitude,” says O’Connell. “She’s a survivor.”

Pictured: Mitchell with Jeffrey Miller, M.D., the Saint Joseph’s cardiothoracic surgeon who implanted the heart pump that she cleverly totes around in designer handbags; photo by Neda Abghari