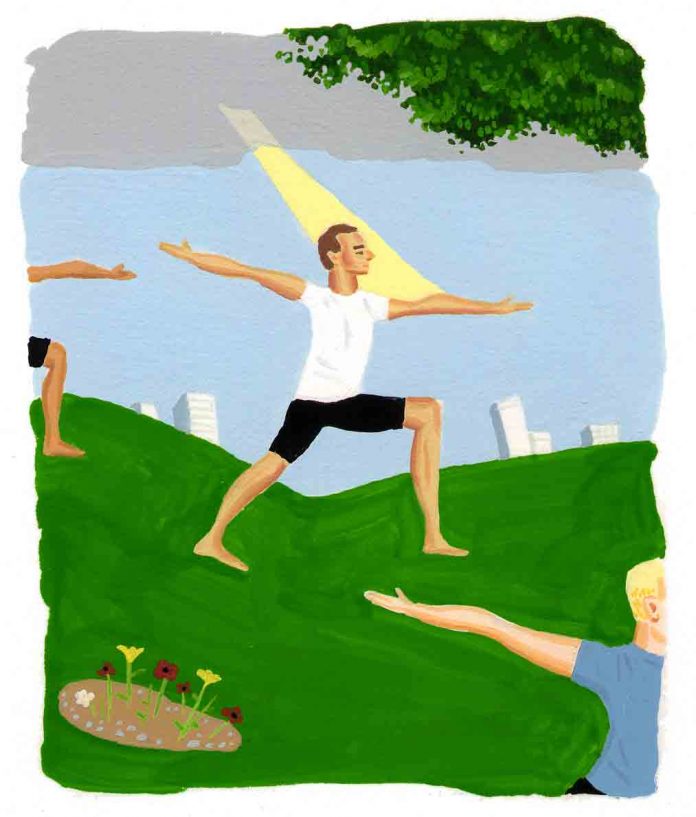 It wasn’t a good day for outdoor yoga. Piedmont Park was soggy, the late-morning temperature was an unseasonable 57, and clouds blocked the sun. I arrived early for the Atlanta Yoga Club class, expecting to find it canceled. Yet there on a knoll overlooking Tenth Street sat Lisa Cohen, one of AYC’s certified instructors, cross-legged on her mat and looking very yogic.
The Atlanta Yoga Club, launched in March, is a grassroots organization aimed at getting yoga outside and accessible “for the masses.” Instead of expensive lessons in a strip-mall studio, the club offers open-air sessions in various styles for only $5. The group—which anyone can join through meetup.com—assembles Tuesday, Friday, and Sunday at Piedmont Park and Saturday at John Howell Park. AYC plans to offer classes every day and expand to the burbs (there’s already a satellite session in the Lawrenceville/Suwanee area), but as cofounder Melanie Snyder, who organized the club with her sister Rebekah, says: “You have to start with a core.” And isn’t the core what yoga’s all about?
My inadequacy as a yoga virgin is irrelevant, but I wasn’t alone: At least four of the dozen attendees were first-timers or rookies. Cohen moved among us, lightly tweaking our Vinyasa positions and expounding on the merits of yoga. “I got into this for the yoga butt,” she said, “but when you’re eighty, you’ll just be glad you can pick up the keys when you drop them.” A more practiced and focused yogi wouldn’t have noticed, but as I twisted toward Tenth Street into a wobbly Side Warrior, I was keenly aware of glances from parkgoers and dog walkers. A homeless guy heckled us, but Cohen deftly turned the disruption into a meditation on focusing inward: “The one thing in the world you have control over is your perception,” she waxed philosophically.
So I let my mind drift with the breeze that stirred the dogwood blossoms. Ducks quacked down at the lake. Somewhere a band warmed up their instruments. And during our last Sun Salutation, a ray of sunshine peeked through the clouds and saluted us back. meetup.com/atlantayogaclub
Illustration by Juliette Borda
Advertisement