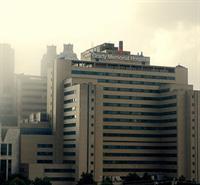 This week marks the most historic moment for our healthcare system since Congress passed Medicare in the Social Security Amendments of 1965. For the first time, consumers can shop for both public and private health insurance plans in one place as the healthcare.gov Marketplace launches under the Affordable Care Act. Plans must cover physician visits, preventive care, hospital stays, prescriptions, and other comprehensive benefits for all Americans—including those with pre-existing conditions.

But as nearly 1.7 million eligible, uninsured Georgians begin seeking medical care, Grady Memorial Hospital faces a new challenge in the wake of Governor Nathan Deal’s refusal to expand Medicaid. Money that once went to Grady and other safety nets as part of the federal Indigent Care Trust Fund will now be destined for states that have already opted in. Following Grady’s narrow recovery from financial collapse in 2007, our city’s provider of last-resort care will now be stripped of $45 million in federal funding each year by 2017—unless Georgia participates in the Medicaid expansion.

In anticipation of the rollout of the Affordable Care Act, I spoke with Grady Health System CEO John Haupert to talk about the hospital’s strategy of stressing preventive care to alleviate the fiscal nightmare ahead.

This interview took place in John Haupert’s office in August. It has been edited for length and clarity.

The one thing we can do—and have been doing a lot of over the last year and a half—is working closely with our patients when they come in to see if they could qualify for Medicaid and they just haven’t done it. As it turns out, there were a significant number of our patients who were able to be on Medicaid but didn’t know or didn’t follow through on the process because it overwhelmed them or it was too difficult.

We started a whole program called the Ineligibility Program where we will even go to the patients’ homes and help them with the paperwork and the forms and walk them through the process. In 2011, the percentage of our patients who had no insurance at all was 42 percent. We got that down to 30 percent simply by helping the patients become qualified [for Medicaid] in 2012.

So, all of a sudden those folks have a form of insurance. And it’s great for us, because we’re now getting paid something; and it’s great for them because it empowers them to receive the healthcare services they need. When you have no insurance, it’s a real psychological barrier to even trying to get into a clinic or make an appointment to get the care that you need.

Most people think of Grady and the downtown ER as synonymous—but you have a network of primary care centers.
Most safety-net hospitals like us have a network of primary care centers and specialty clinics, as we do. It’s better for patients’ long-term health management to be locked in with a primary care physician, so we do everything we can to get them established in a relationship like that. It’s far less expensive there than in the emergency room. We’re talking a $30 visit versus a $600 visit.

There have been studies—including the Health Care Imperative Report by the Institute of Medicine in 2011—showing considerable waste in healthcare spending. What do you see as a major contributor to this waste?
Unnecessary services—which also goes along with inefficiently delivered services. Because of how doctors and hospitals get paid, there has not been an incentive for reducing utilization of services. So if I order three MRIs I get paid for three. If I order one MRI I get paid for one. We have enough science and information now to tell us what evidence-based medicine should look like.

Does Grady have a system for collecting information about best spending practices?
[Grady] is taking the data out of the electronic health record and feeding it into a second system [that] shows by diagnosis-related group what each individual practitioner’s utilization is. You have 12 internists that are all treating patients with simple pneumonia. And their cost per case ranges from $2,000 to $15,000. Why is this guy at $15k, why is this guy at $2k? So you look at antibiotics ordered, how many chest X-rays were ordered, how many lab tests were ordered, and then based on current science, what is best practice considered to be? Well, it may be at $2,500 per case.

Inefficiently delivered services ties into it because we’re often providing all of these primary care services in an emergency room that should be provided in a primary care center. We have this motto: “Right service, right place, right time.” This patient needs X. So what’s the right environment at the right time and the right location to provide that service to that patient that’s most cost-effective and is going to do them the best from a health perspective?

The issue around prevention is that our health system doesn’t provide any reward for helping reduce or prevent illness. It only pays you if you treat illness.

Once physicians begin using best practices, how do you promote patient accountability?
Our choice has been to do that through our primary care centers, establishing this ongoing relationship with patients in the communities they live in, with really pre-set approaches to how you address chronic disease and detect chronic disease earlier on. You invest in early detection because it’s far less expensive than treating disease after it’s detected down the road.

We do a lot of preventive testing on patients that come to us with diabetes, hypertension, heart failure, and different forms of cancer so that we can be more proactive in detection.

How do you encourage people to get primary care and preventive treatment who have been accustomed for decades—maybe generations—to just go to the ER?
One approach I’ve seen work very well is creating relationships with large churches and using the pulpit to get to the parishioners. There’s a program called congregational health nursing where you partner a nurse with a congregation and you set up screening at health fairs. One of our U.S. representatives, David Scott, has a big health fair in his district that we do every year with him.

We detect all kinds of early stage cancers and hypertension through that screening process. It saves us money in the long run.

The Georgia Health Policy Center at Georgia State has already predicted that even if we have Medicaid expansion and insurance exchanges in the state, we are vastly understaffed by primary care physicians to take care of the increased demand.
One of the big concerns I have about all of this, is you have someone who is newly empowered by insurance, and let’s say the governor decides to expand Medicaid, all of a sudden you have almost 1.2 million people who are now insured. Are they going to run into a brick wall to be seen by a physician? Are they going to end up back in someone’s ER because they can’t get to the resources? There’s not the resources to provide the care.

What is Grady doing to revamp the ER?
We are going to have a whole separate track within the ER for those non-emergency patients. Instead of treating those people in the ER the way you normally would, it will be more like a quick clinic visit. And we will have a care-delivery model primarily staffed with nurse practitioners that will get those patients in and out quickly and at the same time work to establish them with a primary care physician in the community before they leave—which we’ve not done in the past. We just treat them, send them back to the street, and then they come into the ER. We will have a deliberate discussion with them about getting established in a primary care medical homes in the community, insured or not, if they are using the ER for non-emergent purposes.

A lot of things that are known as best practice now in running emergency rooms just have to be incorporated here. And then part of the problem is we don’t have enough space, enough treatment rooms. The flow doesn’t work that well, so we are going to begin expanding the (ER) space as well.

The ER sees 350 to 400 patients a day, and that number goes up every year— particularly with the number of mental health patients. We’ve had a 20 percent increase in 2012 over 2011 in mental health patients seen in the ER. Part of the newly renovated ER will have a dedicated psychiatric center specifically for the treatment of emergent mental illness.

Day to day here, we have a lot of really serious mental health issues. In a lot of these big cities, we have a gathering of homelessness. One commonality is mental illness. I’m not talking about simple depression, I’m talking about out-of-control schizophrenia and paranoia disorder; there’s really bad stuff out there.

Grady tries to make sure that materials produced for patients are made at a ninth grade reading level. One of the requirements for our accreditation is an assessment of the competence level of each patient. We have tools we use where we draw the picture of the pill. And we say, “take the pill that looks like this when the big hand is here and the little hand is here” instead of writing “take Zithromax at 12 p.m.” and so on.