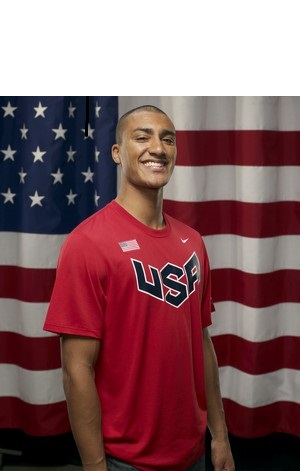 Olympic gold medalist Ashton Eaton, who holds the world record in the decathlon and heptathlon, is in Atlanta this week to compete in a track and field event and to meet with school kids to introduce a free classroom program that offers five-minute brain breaks throughout the day. He showed off his video self—and his gold medal— to kids at Mary Lin Elementary School in Candler Park. Eaton “coaches” the 100-meter sprint part of GoNoodle where kids spend five minutes warming up, running in place, and throwing imaginary shot puts. The goal is to keep kids moving throughout the day which, studies show, helps keep them focused and can help boost their grades.

You’re probably approached to be a spokesperson for a lot of products. What appealed to you about this one?
Anything that helps kids in my mind is a no-brainer.

Growing up, you played football, soccer, basketball, and wrestled, in addition to running track. How important were sports in your life?
Now that I think about it, it was my passion. I didn’t know it then. I just liked games and it just so happened that those games were sports. I was so excited to go to a baseball game or a wrestling match or a martial arts event.

When did you figure out running was your thing?
Of all the things I did, it was apparent that running was one of my most natural attributes so track and field just naturally fell in there. It kind of happened in a physical education class, and then I joined an organized sport.

What happened in PE?
We had a mile time trial. The PE teacher didn’t care how fast we were, but I wanted to see how fast I could be.

There’s less time being spent in PE these days in schools. That’s one of the reasons behind this program— to sneak in movement throughout the day. Do you think kids miss out when they don’t have physical education?
I like (this program) because kids can decide for themselves if they like being active. In PE I was able to decide I like doing this rather than sitting in class. This is at least a way to see that running is a way to have fun and it would at least open their minds that running could be a fun sport.

What do you do in the video?
I lead them as they warm up and run in place. Then I essentially teach them how to throw a javelin. I tell them to act like they’re holding a paper airplane and throw one of those. At the end I say, “You won the gold medal!”

Do you have your gold medal with you, to show off to the kids?
I do have my gold medal. It’s a pain in the butt in airports. It just shows up as a big black circle on the security scanners.

Obviously you were good in sports as a kid. How were your grades?
I was very average academically. I would say that I had a lot of energy. Recess was what I always looked forward to. I can’t say whether I was more focused after recess was over. But I would definitely say I was more well-rounded (because of sports). I was more relaxed and always had something to look forward to.

Ashton Eaton will be competing in the Atlanta Grand Prix, Friday, May 17, at Greater Atlanta Christian School with other Olympic track and field athletes including Lolo Jones. Admission is free.