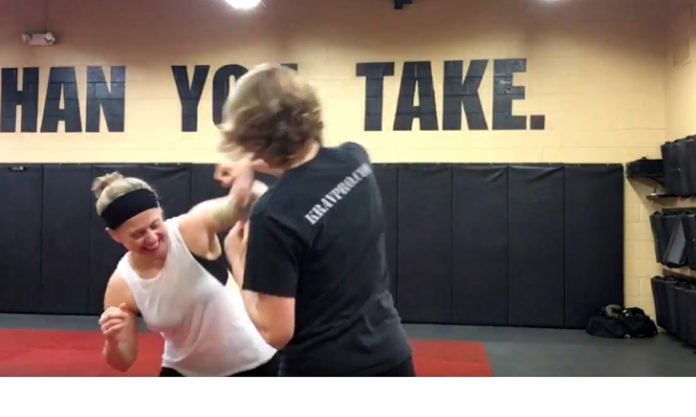 A polite, skinny nurse punched me in the head.

She apologized. But it was my fault, really.

I was laughing too hard and forgot to put up the proper block. Thankfully, she was patient, as this was my first time at Krav Pro Self Defense & Fitness, a Duluth studio that teaches the Israeli martial art known as Krav Maga.

Krav Maga (which means “contact combat” in Hebrew) was developed in the 1950s by Hungarian-Jewish martial artist Imi Litchenfeld for the Israeli Army and was first taught to civilians in the 1970s. In the last couple of decades, celebrities have gotten into it, with stars like Daniel Craig, Tom Cruise, and Jason Statham reportedly using Krav Maga to prepare for fight scenes.

I’ve tried a lot of celebrity-endorsed stuff—most recently squeezing into a painful corset like a Kardashian—with pretty low expectations. This, though, felt like the real deal: a chance to get my heart rate up while also learning some practical self-defense techniques.

The studio is led by owner and chief instructor Richard Swords (the perfect name, right?), who trained in Israel and, as a certified Krav Maga third-degree black belt instructor, has the highest level of certification in the state.

He wasn’t teaching my class, but the guy who did was nearly bouncing with energy, and had a great way of looking all nonchalant (“oh, hey, how’s it going?”) before abruptly unleashing rapid-fire punches (yelling something that sounded like “mice-mice-mice-mice-mice!”) into a pad.

For my first class I was joined by about 15 dads, teenagers, and 20-somethings looking to get fitter and, as some of their shirts said, fearless (other Krav Pro shirts say things like, “we do bad things to bad people”). The sweet and quiet nurse who punched me in the head was there mostly to learn to protect herself in case something bad happened at the hospital.

We started out by jogging the perimeter of the studio, adding high knees and lunges, then did some pushups. Next we partnered up for what felt like a playground game of Slapsies, which had us attempting to grab each other’s arms while swatting each other away.

Then the instructor ran us through some basic arm and leg movements to prepare us for learning blocks, which looked a bit like “wax-off” and “paint the fence,” and taught us how to properly kick an attacker.

I held a pad the size and shape of a riot shield in front of me as the nurse kicked it and followed up with a series of palm strikes. After that, the instructor put me into a group of three, cued up Cypress Hill’s “Insane in the Membrane,” and told me to close my eyes. Then the nurse came at me with the pad, and the other classmate—wearing sparring mitts—called out to me, and I had to attempt to fend them off.

To say that kicking and punching the crap out of stuff on a Wednesday night was fun would be a gross understatement. I was nearly giddy as I beat up on those foam things, and covered in sweat by the time we lined up, bowed, and went through a “good-game” series of high-fives to end the class.

I may not have walked out of there ready to take down an attacker, but the folks at Krav Pro did make me feel like they could get me there. So maybe I’m a badass in the making.