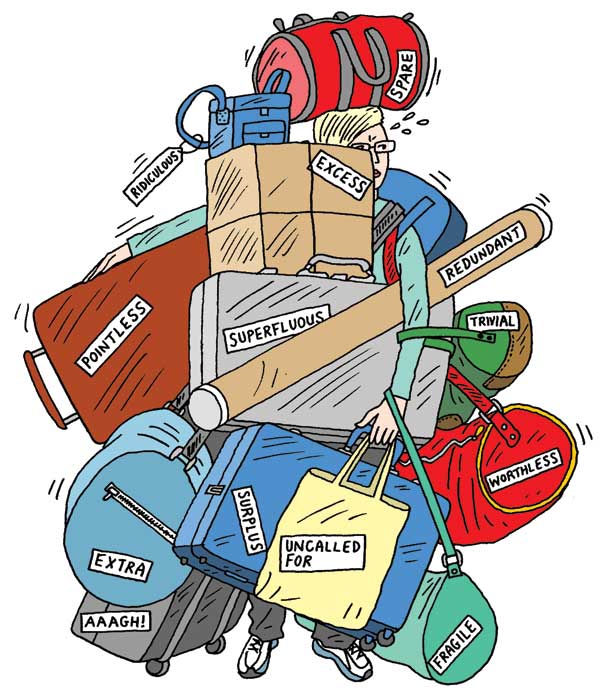 The other day I was at the Atlanta airport and saw two Eastern Europeans lumbering down the concourse, laden with a suitcase that looked like they just got up that morning and decided to put a handle on their house. Then, of course, when the airline deemed the suitcase too heavy, the two tourists plunked down on the linoleum, unzipped it, and pulled out the things they could live without: a curling iron, a used George Foreman grill wrapped in cellophane, a big bag of what looked like wine openers, jars of jam, etc. With a flourish, they handed these to the person who had driven them to the airport. “This valuable bounty is for you to keep now,” they probably said in their tongue to this person, who hardly waited for them to turn their heads before gingerly placing all the items next to the waste bin on the way back to her car.

As the tourists toddled away with their carry-on sacks hanging from them like big bladders, I figured there’d be more moments of generous flourish before they reached their final destination, more divesting. It made me think about what the world would be like if globe-hopping were not so easy; if it entailed more than simply getting on the plane, putting on your sleep mask, taking your sleep medication, putting on your sleep earphones, sinking into all this “padding,” until the next time you open your eyes and, voila!, you’re in a whole other hemisphere, where you’ll no doubt bound off the plane with all your baggage and idiocy intact.

If you were faced with the task of traveling along the face of the earth, as opposed to taking giant hops above it, physical objects would not be the only unnecessary things you’d have to divest. For example, how can you possibly retain certain prejudices of a particular country if you are in the middle of its people and dependent on them to get you through it? You’d have to be accepting, or at least understanding, of your environment to reach your destination. Take terrorism. If a terrorist had a mind to do harm to a culture located on the other side of the planet, and in order to get there he had to undertake a journey that took perhaps months—over mountains, through rivers, across oceans, by elephant, horseback, and foot—who’s to say that by the time he reached his destination he would not have divested his hate somewhere along the way? Who’s to say he would not have decided his hate was an unnecessary thing?

Because how could anyone survive such a journey while clinging to such uselessness? Consider the “Titanic.” I’ve always been fascinated with the fact that a bigger percentage of men traveling second-class perished on the “Titanic” than those in lowly steerage. The reason? Because the former were more sequestered from the reality of their situation. They thought, in the middle of their opulent padding from the elements, that they had time to go to their cabins and gather their things. They were wrong. Those in steerage, though, they had no such padding. They were served by their proximity to the elements.

I should have had this in mind when my sister told me she was moving to Nicaragua. She drove there from Las Vegas. I kid you not. She just got in her car and pointed it south. I didn’t hear from her for a month, and girded myself for the news that she’d been slaughtered by a voodoo religious sect like that missing college kid who’d partied in Matamoros in the eighties and whose brain was later found in a cauldron. But she made it, which was only slightly better news, because before she’d left she’d made me promise that once she got there, I’d fly down with the rest of her stuff. When I arrived, my bags bursting with her kitchen appliances and other luxuries that would have bogged down her own trip, I was surprised to see that she’d acquired a fluency in Spanish and a keen force field to the crowd of pathetic panhandlers who followed me everywhere, clutching. “They want the stuff in those suitcases,” she laughed. Then she glided ahead of me, melding seamlessly into the culture.

“Excuse me,” I shouted after her. “I need help with these bags!” That must have been a cue of sorts, because immediately I was besieged by grabby locals, and suddenly my load was a lot lighter. Soon I was able to catch up to my sister and hang on to the tail end of her tank top. From that point I was able to move freely through the crowd, clutching close to me all the things that were really necessary, having been divested of all those that really weren’t.