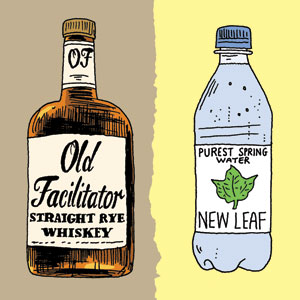 My friends don’t like to hear this, but I’m afraid I’m done with drinking. I still appreciate alcohol. I just don’t drink it anymore. In fact, I consider my little girl evidence that alcohol has its purpose, if by “purpose” you mean the facilitator for the sex that was needed in order for her to get here. As a matter of fact, I estimate I would have missed out on roughly 50 percent of all the sex in my life if not for alcohol. And right now, with my love life dried up like a husk, I can appreciate the recollections I’m able to muster in that regard, if by “recollections” you mean romanticized delusions based on largely meaningless encounters.

Yes, those were the days. And then I stopped drinking—if by “drinking” you mean boozing it up like a biker chick—and it’s probably no coincidence that this is also when I stopped having sex (pretty much). Because back when I was sexually active—and by “sexually active” I mean sifting, booze-addled, through a fog of body parts—I didn’t have a lot of patience for formalities, or even standards for that matter (if by “standards” you mean underwear).

Most of my best friends are gay men, after all, which means they have typically crappy taste in dates for me. In fact, if not for my friend Daniel’s coaxing, I might not have dated that guy who made a living fixing cars in his yard, if by “dated” you mean endured a litany of canceled plans followed by booty calls. And if not for my friend Grant’s encouragement, I might never have rendezvoused with that guy a decade younger than me, if by “rendezvous” you mean met up with at a pool hall so he could take advantage of my savantlike ability at billiards to hustle his friends.

And believe it or not, I didn’t mean to stop drinking altogether. I just went through a time when I was busy and boozing got dropped from my schedule, and by “schedule” I mean my life in general. Plus it was fun to be the only sober one, and by “fun” I mean I got to be the holder of such knowledge as why my friends kept waking up from a drunk to find those little mystery bruises all down their arms. But after a while even those jollies subside, and the luster wears off of bar scenes, and by “bar scene” I mean a bunch of blobbering booze-tards with their tongues out trying to hook up with each other.

Then it occurred to me that alcohol intensifies loneliness and nullifies standards, which is a bad combination that could prove expensive. By “expensive” I mean, for example, the time I went online and bought a nonrefundable ticket to Grand Cayman just to reconnect with a scuba instructor I featured in a travel piece years before. So my finances are a lot less complicated now, and by that I mean that sober single parenthood has proven to be a lot cheaper than lonely drunk dating-hood.

So it’s not often I miss being single, and by “single” I mean child-free, and by “child-free” I mean I had no agenda or plan, no checklist for the perfect man, no pulsating uterus on my sleeve hoping to latch itself onto the closest Y chromosome. It’s not often I miss those days when I simply flitted around, tossing back shots, figuring everything would work itself out.

Because so far it has, if by “work itself out” you mean there actually came a moment when you woke up from a bender to find a baby in your life—and I’m not saying this happens to everyone, or even that it happened to me—and by “wake up” I mean there has got to be a point of diminishing returns, doesn’t there? There has got to be a point where you tell yourself it’s time to start addressing your responsibilities, if by “responsibilities” you mean the happy accident that has your eyes and a smile as wide as the open sky. And it’s time to stop worrying about love, if by “worry” you mean being dead certain it will never come. Because it came. It fell into your life, if by “fell” you mean grew like a little linebacker in your belly for nine months and ten days and had to be removed forcibly.

So I appreciate alcohol, I just don’t drink it anymore, because now I have purpose, and by “purpose” I mean this lovely daughter whose presence is evidence that all those stumbles I used to think were mistakes were actually steps that were necessary to bring us together. So I know my friends don’t like to hear this, but I’m afraid to say I’m done with the drinking, and by “afraid” I mean not afraid, and by “done” I mean done.