Home Uncategorized Before & After: Second Chances 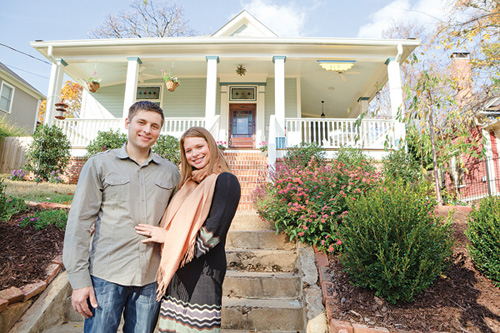 When Jennifer and William Ryan bought their 1906 cottage in Grant Park, “it resembled something out of an Alfred Hitchcock movie,” says Jennifer. Four years earlier, the humble house had burned almost to the ground. Little remained but the frame and a fireplace. But Jennifer felt drawn to this unloved skeleton, partially because she had grown up in a Victorian home once ravaged by fire.
The happy ending to this tale hit a detour after the closing. The Ryans paid thousands of dollars to a contractor who skipped town after he’d removed so much of the remaining structure, they weren’t able to get it approved by the city as a remodeling project. Starting over, Jennifer and William drew up plans for a new construction project, then applied to the Atlanta Urban Design Commission—all while coping with depleted building funds.
“I had to look at this whole experience as an opportunity,” says Jennifer. “We decided to take the time to add something special to each room, rather than rushing through the remodeling project we were originally going to do.”
To stay within the tight budget, the couple scoured Craigslist and eBay for salvaged items such as old doors and windows. While they had to meet strict requirements for building in a historic neighborhood, Jennifer wanted to give the house a fresh spin. For instance, a transom window is required above the front door, but the Ryans hung their stained-glass version with a hinge so it can swing out like an awning to let in the breeze.
“We wanted it to be Victorian enough for resale, but a little funkier on the inside,” she says. “I always say that this is not your mama’s Victorian.”
The kitchen has both vintage and modern elements, such as stainless steel appliances that Jennifer bought as floor samples. As a loftlike feature, 100-year-old bricks were cut a quarter-inch thick, then used as a surround on the island and vent hood. The bricks reference the fireplace from the original structure. And as another nod to the past, Jennifer made her own light fixtures by converting Mason jars into pendants. (She was even inspired to start a business, aptly called Reclaimed Lighting. See reclaimedlighting.com and vintagemodernstyle.com for Jennifer’s work.)
The adjacent dining room is based on the original layout of the house, although the Ryans added a window seat as that room’s “something special.” Jennifer made a chandelier out of jars, then paired an antique wooden table with green acrylic chairs.
Their hard work was rewarded soon after they finished the project, when the Urban Design Commission bestowed the house with the Award of Excellence for new construction in 2009.
This article originally appeared in our February 2011 issue.
Advertisement