It might seem overly ambitious to list a Cabbagetown loft with a galley kitchen and a single bedroom at $785,000—more than any other condo in the neighborhood has ever landed. But hear owner Brandon Sutton out.

The unit, in the historic Stacks lofts, includes the building’s 71-foot tower, which has become a symbol of the neighborhood and has been a fixture on the city’s skyline since it was built as the Fulton Bag and Cotton Mills in the 1880s. “It’s certainly unique in Atlanta,” Sutton says, “and I bet you’d be hard-pressed to find anything like it elsewhere.” Having lived in the so-called “tower loft” for 14 years, Sutton knows he’s got something one-of a-kind that oozes the history of Cabbagetown, a turn-of-the-twentieth-century mill village built alongside Oakland Cemetery. As well as witnessing decades of prosperous manufacturing, labor strikes, and post-World War II decline of the industry, the roughly 140-year-old red-brick walls survived a massive fire in 1999 and a tornado that slammed into the building in 2008.

Those red-brick walls are still there, exposed on every side of Sutton’s unit in the Stacks’s H Building. There, the entry opens up to the sleek galley kitchen, designed by Joel Kelly with maple cabinets, travertine countertops, and Miele appliances. The lone bedroom, with four original brick walls, offers passage to the lone bathroom, spa-like with a soaking tub, and more travertine and brick. But the living room delivers the real appeal to would-be buyers. Windows on three sides boast views south, toward Cabbagetown’s community of dollhouses; east, overlooking the rail depot at Hulsey Yard; and north, up toward Old Fourth Ward and parts of the downtown and Midtown skylines.

And then there’s the view upward from the living room, into the cavernous 71-foot tower. Two levels of thick, crisscrossed timber beams (once home to massive water tanks) crawl up the brick, still somewhat charred from the fire two decades ago, forming mammoth Tic-Tac-Toe boards. This is what Sutton has really put on the market: Not the tower itself, but its potential. 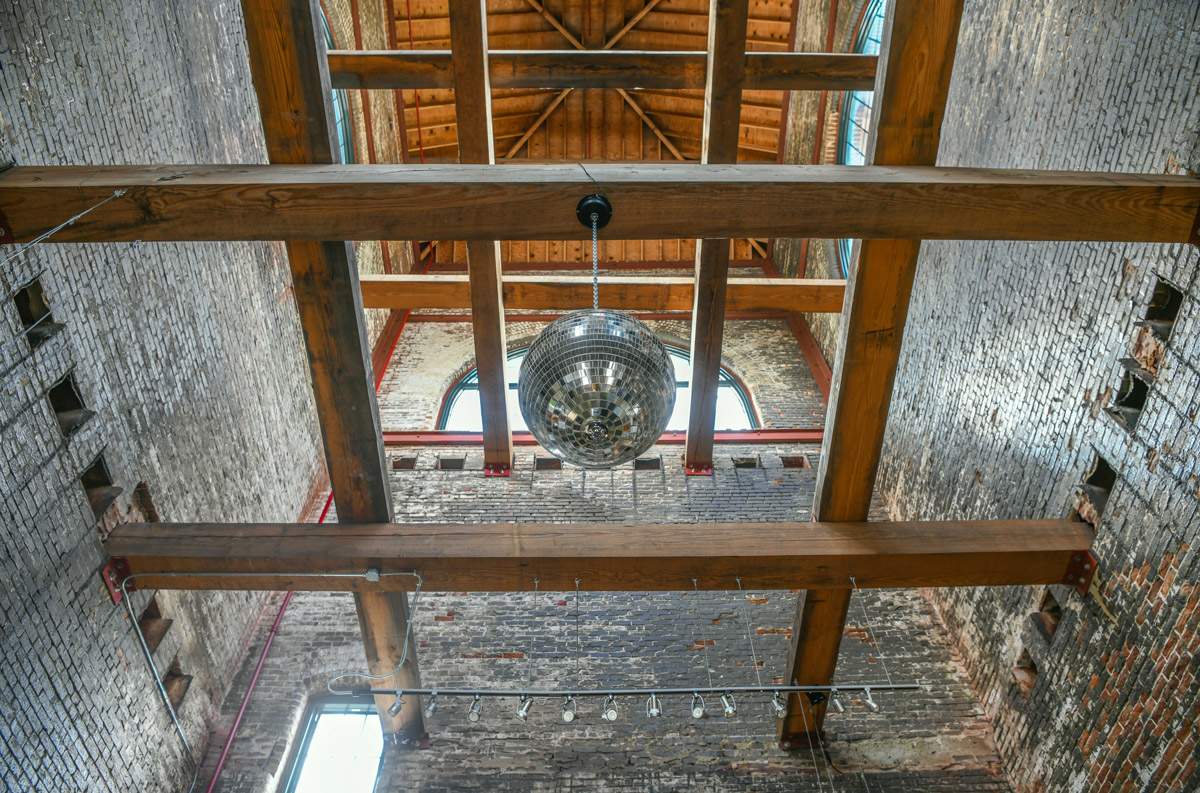 Sutton says a savvy buyer will see the promise in building up, which could boost the unit’s footprint by about 1,200 square feet and turn this single-floor, one-bedroom unit into a three-story dwelling outfitted with, perhaps, another bedroom and bathroom and a penthouse-level observatory. After all, at the top, the city is visible for a full 360 degrees, through enormous arched windows on all sides.

This isn’t the first time Sutton has put his place up for sale. In 2010, four years after he scored the condo for a cool $300,000 and some change, Sutton offered it for $589,000. “I put it on the market in the middle of the Great Recession, and I had plans to move out West and buy a sailboat and sail off into the sunset,” he says. “I knew it was outrageous, but I just put it out there.”

That effort didn’t pan out, and Sutton eventually started renting the space out to, among others, Hollywood professionals in town for movie and TV shoots. (He says actress Eiza González, who played a bank robber in Edgar Wright’s Baby Driver, was a delightful tenant.)

Just a few months ago, Sutton teased the idea of selling his condo yet again, publishing a post on Zillow’s “Make Me Move” platform that said he’d hand over the keys for $750,000. His phone began ringing almost immediately. He turned down two offers below his asking price.

Sutton officially listed the condo in April. He says he appreciates that putting the place on the market in the midst of the coronavirus pandemic guarantees a fickle process. “But I’ve lived here longer than anywhere else in my life,” he says. “It’s time to move on—to make a bold move.” stacksloftstower.com