Home Uncategorized Made in Atlanta: Shiner 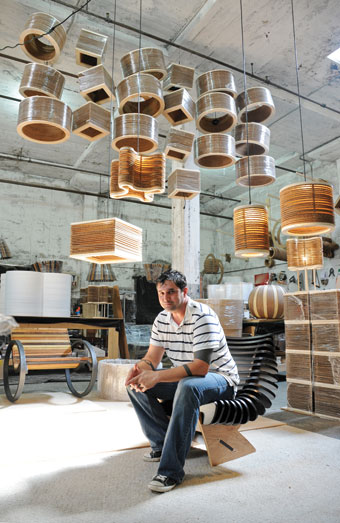 Light fixtures made from corrugated cardboard, birch sconces made of lumber scraps, a curved desk of black walnut remnants, and a chair with elliptical rockers inspired by a wrecked motorcycle wheel comprise Joe Manus’s modern-cum-rustic furniture collection. The East Point resident’s line showcases his love of what he calls “bastard materials”—in other words, trash—giving his pieces idiosyncrasies and environmental appeal.

This new brand grew out of a construction and fabrication company called Art Through Labor, which Manus started in 2001. The firm designed and built nightclubs, restaurants, boutiques, homes, and other commercial spaces, including Opera nightclub, Vinnie’s Styles in Little Five, and Virginia-Highland’s Belly General Store. During the aughts, the company also designed a handful of furniture pieces to populate its buildings—a barstool here, a bench there.

When the real estate bubble burst and construction projects dried up, Manus changed gears and turned furnishings into his bread and butter. Rechristened Shiner in January of this year, the enterprise has become both a critical and commercial success. Manus won Best of Show at Peachtree Center’s AmericasMart that month, leading to shows in New York and High Point, North Carolina. Kudzu Antiques (kudzuantiques.com) and Design Lighting Group (dlightinggroup.com) carry his line in Atlanta, but retailers all the way to Italy currently sell Shiner.

Manus gets all of his materials for free—by the truckload. The stacks of cardboard and piles of plywood in his warehouse are the refuse of other companies. “It’s easy to make a beautiful lampshade out of silk,” Manus explains. “If I do a lampshade out of corrugated cardboard, to me, it’s a higher level of design.” A pile of trash can provide some of his best inspiration.

Coming to design from a construction background, Manus tends toward bold forms and plenty of attitude. His website uses adjectives such as hip, muscular, sexy, clever, and dark.

The brand has already sold 5,000 units, and Manus has 200 prototypes in development—including floatable outdoor furniture made of Styrofoam, and seating fashioned from compressed paper pulp. Yet with all his initial success, Manus still worries about the future, which explains the new brand’s brazen moniker. “If I was going down, I was going down fighting and following my passion,” he says. “I’m still waiting for the sucker punch.” shinerinternational.com

This article originally appeared in our August 2010 issue. 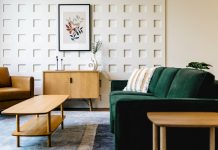