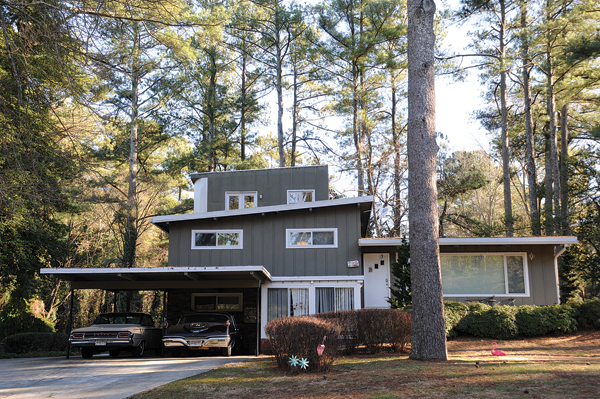 Residents in Atlanta’s Northcrest subdivision can thank Hollywood for the nostalgia associated with sixties neighborhoods such as theirs—which have starred in countless movies and TV series. That interest has spurred home values. Even in one of the nation’s worst real estate markets, Northcrest properties are selling fast.
“A home that’s totally renovated with midcentury charm won’t last more than four weeks,” says Vanessa Reilly, a Northcrest resident and agent with Domo Realty. Atlanta has a limited inventory of authentic modern houses, so demand is steady. The clean-lined aesthetic appeals to design-oriented home buyers, Reilly says—architects, photographers, musicians, and television producers who scorn a McMansion.
Tucked into the northeast corner of the junction of I-85 and I-285, Northcrest’s location is technically OTP, but the area has an intown vibe. “Considering where it is, Northcrest really is a hidden area,” says John Eaton, who maintains the website northcrestmodern.com and has lived in the neighborhood for thirteen years.
Like many of his neighbors, Eaton was attracted to the relative affordability (currently in the $200s) and architectural integrity of the houses, with their low-pitched roofs, tongue-and-groove ceilings, large picture windows, and open floor plans. Fireplaces feature elongated Roman bricks. Lots are generously sized and filled with mature trees, and the terrain is slightly hilly, making it well suited to split-level floor plans.
P&H Realty Company developed Northcrest from the late 1950s to the early 1970s. Touted as “homes of tomorrow . . . today,” the neighborhood features a mix of traditional brick ranches, A-frames, Colonials, and split-levels. Original sale prices were under $30,000 and included state-of-the-art amenities such as wall-to-wall carpet and central air-conditioning.
Most of Northcrest’s 500-plus residents embrace the character of sixties chic. Reilly and her boyfriend dress in vintage clothes and blog about modern home renovation. Enthusiasts search for original furniture by period designers such as Hans J. Wegner and George Nelson. Other neighbors mix Ikea with Craigslist finds for a modern aesthetic that’s youthful, if a bit kitschy. First-time home buyers love that some of the original residents still live in the houses where they raised families, sharing stories of Northcrest life from decades ago.
This article originally appeared in our March 2011 issue.
Advertisement