A dark-skinned black woman with a tall afro gazes into the distance. Black and white images of Coretta Scott King, Shirley Chisholm, Angela Davis and other female civil rights pioneers surround her. The words “fearless” and “courage” and “surviving” rest on her torso. She is “The Fortifying Woman,” artist Shon Pittman’s multimedia painting dedicated to honoring the strength and ingenuity of black women.

Pittman, 27, whose father is also an artist, started drawing and painting as a hobby. She began college at North Carolina A&T University as a pre-med student, but during her junior year, she decided to change her major and pursue art as a career. Today, the subject matter for her art is largely inspired by her teenage sister—Pittman wants her to see the kinds of images of strong black women in art that she didn’t have growing up.

Pittman is one of the 10 artists whose work will be on display at the Mayor’s Gallery at City Hall new exhibition, Daisy Chain, which runs through June 21. The exhibition features artists from TILA Studios, which started in East Point as a gallery and studio space for women artists. Now, as studio founder Tiffany Latrice prepares to relocate to a larger building in Atlanta next year, this exhibition serves as a homecoming of sorts for the artists. The exhibition name refers to the inaugural group of TILA Studios Garden Fellows—a group of black women artists selected to showcase their work at Art Basel in Miami last December. Daisy Chain will feature two new works by all 10 fellows, plus five collaborative works that they worked on in pairs.

“I want the patrons to witness the power of collaboration that is fostered through elevating and empowering the creative economy in Atlanta,” says Latrice. “These are Atlanta artists that deserved to be celebrated, recognized and embraced. This exhibition is more than just a display of their work and craftsmanship, it’s a celebration, homecoming, and induction of a community of working artists that may be otherwise overlooked.”

The exhibition title is also apropos for Pittman’s work because for her, art and science have always gone hand-in-hand. A daisy chain, for example, could refer to a group of flowers or circuits in electrical connections, both of which have their own beauty.

“Having a biology degree helps me to see the beauty in everything,” says Pittman, who is currently pursuing a nursing degree while working as a full-time artist. “Everything in life has a pattern—trees are shaped like your lungs. Flowers are shaped like the inside of a certain fruits. Science and art aren’t far apart.”

Jasmine Nicole Williams, 27, a graphic artist who will also be featured in the exhibition, says she wants black women and girls to see themselves reflected in her work. Some of her earliest artistic endeavors came in the form of writing and illustrating fan fiction about her favorite boy bands while in middle school. She went on to earn her degree in studio art from the University of West Georgia, where she studied printmaking. She says she was drawn to printmaking because it allowed her artwork to live in several places at once.

“When I first got into printmaking, my vision was that I saw my art all over the world,” Williams says. “Printmaking is spreading the gospel of my political stance—it’s the ability to exist all over the world with the same image. It’s the people’s art because it’s so accessible.”

Most of her pieces are inspired by people she knows, but she’ll also walk up to strangers and ask, “Can I immortalize you?” She has rendered portraits everyone from friends and relatives to 2018 Georgia democratic gubernatorial candidate Stacey Abrams. She is currently experimenting with cyanotypes [a printing process that results in blue images] for her pieces in the exhibition, exploring the idea of black women as architects of the universe.

This theme also shows up in Ayanna Smith’s work. The Atlanta native’s father is also an artist and she earned her BFA in fashion marketing & design from American InterContinental University. She is a mixed media abstract artist who explores maternal mortality rates among black women and domestic abuse; her recent solo show at Gallery 992 was called Womb Restoration. She describes her work as colorful and free-flowing and believes that art is an avenue to healing.

“The daisy chain represents how we are all connected,” says Smith. “Building healthy relationships is important for our internal healing, growth and well-being, especially as black women. We have stories to tell. We have a brilliance that needs to be shared—and we’re talented.”

If you visit: The opening reception is on May 3 from 4:30-6 p.m. and is open to the public. Works will be available for purchase. The exhibition runs through June 21 at the Mayor’s Gallery at City Hall, located downtown at 55 Trinity Ave SW. The gallery is open Monday through Friday, 10 a.m.-5 p.m.

Update 4/24/19: This story originally stated the exhibition was at Gallery 72. It was moved to the Mayor’s Gallery at City Hall. 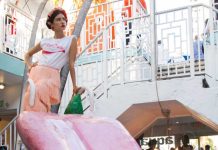 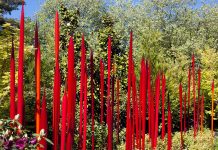