Parliament of Owls
When: July 27, 8 p.m. (step off is at 9 p.m.)
Where: The Grove at Colony Square
Cost: Free
Details: Chantelle Rytter, the architect of the BeltLine’s popular lantern parade, brings this avian-themed parade to Midtown this weekend. Bring a white owl lantern (there’s a workshop at Colony Square on Thursday) and dress in all-black to participate, or simply set up along Peachtree to watch the owls take flight.

Wednesday Wind Down in the Point
When: July 24, 5–9 p.m.
Where: Downtown Commons in East Point
Cost: Free
Details: It’s a homecoming show for Goodie Mob, who will headline this free outdoor concert in East Point. The evening, emceed by Greg Street and Derrick Boazman, features performances from Jukebox, Cherrelle, Kilo Ali, and Dana Dane. There will also be food trucks on site and bar options.

Phoebe Robinson
When: July 25–27
Where: Punchline Comedy Club
Cost: $30
Details: Phoebe Robinson is on fire. Best known as the cohost of WNYC podcasts 2 Dope Queens and Sooo Many White Guys, Robinson has also written two bestselling books, starred in Netflix’s Ibiza alongside Gillian Jacobs and Vanessa Bayer, and signed a multi-year deal with ABC Studios this past spring. She brings her “Sorry, Harriet Tubman” stand-up tour to Atlanta for five shows this weekend.

Zombie Pub Crawl
When: July 27, 5 p.m.
Where: Diesel Filling Station
Cost: $15–$30
Details: It’s the 10th anniversary of this Virginia-Highland bar crawl, where the undead roam the bars of Highland Avenue, including Diesel, Dark Horse Tavern, and Neighbor’s Pub. A base ticket gets you a zombie-themed shot at each participating bar and an invite to the after-parties, but you can upgrade to packages that include makeup and bottomless beer.

Fêtes de Bayonne
When: July 28, 4–9 p.m.
Where: Cooks & Soldiers
Cost: $75
Details: Now in its third year, this party at Basque restaurant Cooks & Soldiers on the Westside is based on the French festival of the same name. The $75 ticket gets you unlimited food—paella mixta, shrimp a la plancha, cheese, and charcuterie among other dishes—and drinks, including beer, cider, gin tonics, and wine. Dress code is red and white, but arriving in a head-to-toe cow costume (no, really) will get you in the door for free. 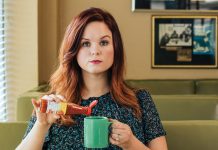