Award-winning documentarians Sarah Burns and David McMahon will debut their latest work, East Lake Meadows: A Public Housing Story, at 8 p.m. March 24 on PBS. The film chronicles the history of the East Lake Meadows public housing development, which built in East Lake in the 1970s and torn down and replaced with the Villages of East Lake apartments in the 1990s, and the gentrification of neighborhoods like it all over the country.

“I felt like for people of a certain age, or for black [people], or if you grew up in that part of Decatur, [this documentary] means a lot. There’s a human face to it,” says King Williams, and associate producer on East Lake Meadows and director of The Atlanta Way, a documentary on gentrification in Atlanta.

Today, residents of the Villages of East Lake reside on what is now known as Eva Davis Way, named after the late East Lake Meadows resident and tenant association president. Davis, a key character in the film, helped organize everything from voter registration drives to neighborhood clean-up efforts. Her grassroots actions would get her in touch with then-President Jimmy Carter, and that high-powered connection would later help spearhead a $33 million grant from the U.S. Department of Housing and Urban Development that was used to revitalize the community. The documentary includes commentary from several who were involved with Atlanta’s public housing during the 1970’s, 80’s, and beyond, including former Atlanta Housing Authority CEO Renee Glover, along with former residents of the development.

“The voices and stories of the former residents of East Lake Meadows are important and should be seen and heard,” says documentary subject Carol Naughton, the former general counsel for Atlanta Housing Authority and current president of Purpose Built Communities, an Atlanta-based nonprofit founded on improving communities. “This film is not just about how a neighborhood can fail its people. It is also about the incredible resilience and resourcefulness of people forced to live in extremely difficult circumstances and how that is all too common in our cities.”

A lot has changed since East Lake Meadows housed more than 1,000 mostly black residents—current East Lake residents have access to a charter school, a YMCA, and a community learning garden and urban farm. Burns (daughter of famed filmmaker Ken Burns) and McMahon try to illustrate in the documentary how changes in the neighborhood initially created more negative results than positive effects, both here in Atlanta and at public housing developments across the country. Poor construction and a lack of government support and funding contributed to rising violent crime and drugs in the community, ultimately leading to its demolition. But the documentary doesn’t solely focus on the negative.

“The East Lake Meadows homes were full of people, beautiful black people, and we have to do more to document the history of public housing,” says Williams.

A number of former residents share their personal stories about moving to East Lake Meadows and for the first time in their lives having enough room for each individual family member. For many, it allowed them to finally have something of their own. Former residents including Beverly Parks and Lawrence Lightfoot discuss in the film how moving to East Lake Meadows was a blessing that within a couple of years became a curse.

“Cities in the United States did not become racially segregated by accident,” says Naughton. “The history that we all must bear—but rarely talk about in public—is that of the explicitly racist public policies and private actions that systematically segregated neighborhoods and stripped opportunity from communities of color. Public housing is one example of failed policies that ultimately concentrated poverty and denied opportunity to generations of American families.

“I hope his film helps us reflect as a country on the structural racism embedded in our cities and what we can do to eradicate it and make the American dream available to all who live here, regardless of neighborhood or race,” Naughton says.

The film will stream for free on PBS after the March 24 premiere. 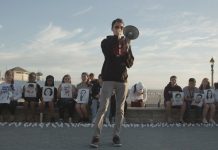 Us Kids, a documentary about the Parkland school shooting survivors, plays tonight in Atlanta