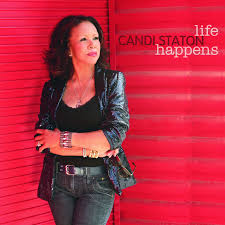 Describing her tumultuous two-year marriage to former Atlanta Braves outfielder Otis Nixon, Candi Staton doesn’t sugarcoat a thing: “It was hell on earth. My God, it was the most terrifying and devastating time in my whole life. I was going through the fires of hell trying to figure out how to live with him and then how to find a way out of that crazy marriage.”

Now divorced from the troubled ball player (Nixon has been arrested on drug charges multiple times over the last few years, most recently in 2013), the veteran Atlanta soul singer is back with an aptly titled new album, Life Happens. Inspired by Staton’s recent experiences, Life Happens is a song cycle chronicling the trajectory of a love affair, from the flutters of falling in love to the bitter break up and beyond. The project marks a reunion with her FAME Records producer Rick Hall, whose famed Muscle Shoals studios helped to launch Staton’s career in the late 1960s and early 1970s. The pair appeared in last year’s critically acclaimed FAME documentary, Muscle Shoals, along with Bono, Aretha Franklin, Keith Richards and Mick Jagger.

“I Ain’t Easy to Love,” the song Staton is depicted recording in the doc, leads off the new album. On it, a pair of notable fans — former Drive By Truckers member Jason Isbell and The Civil Wars’ John Paul White join her. Isbell even convinced Staton to sing a debut with him on stage at this month’s Shaky Knees music festival. “Jason is a complete sweetheart,” Staton says. “I feel like I’ve known him all my life. Jason, John Paul and I had such fun recording that.”

While Staton effectively sells the first third of Life Happens, the singer really sinks her teeth into the material detailing that period in a relationship when the wheels begin to fall off the love bus. Written or co-written by Staton herself, these are songs with titles like “You Treat Me Like a Secret” and “Three Minutes to a Relapse.” The album’s slinky, Hammond B3 fueled, five minute opus “She’s After Your Man,” was inspired by a Mississippi golf tournament outing with Nixon. Sample lyrics? “She comes rolling her hips from side to side, looking for someone to take for a ride.”

“We were sitting at the bar with other athletes’ wives,” Staton recalls. “And this chick comes up and just slides herself between Otis’ legs with me sitting right there! My mouth gaped open. This is what happens when you’re married to an athlete, you see. I just looked at him and said, ‘If you don’t tell her to move, I will.’ One of the other wives said, ‘Oh, baby, you just need to get used to all that.’ I said, ‘No I don’t. Not me.’ In the lyrics, I quote my sister Maggie, whose favorite saying is, ‘People change. But not much.’”

Unfortunately for us, the fade out on “Three Minutes to a Relapse” begins just as Staton really starts to cut loose on listeners. “They wouldn’t let me put the long version out!” Staton says, laughing. “I was told, ‘You just sound angry.’ I guess I was but it sure felt good to get it all out!”

Jetting off this week for concert dates across the Atlantic to introduce fans in Hamburg and London to Life Happens, Staton says she’s finally in a good place. “Marriage just doesn’t work for me. I’m alone but not lonely. This album is about the happiness, the heartache and the pain, everything that comes with love. We’ve got to go through these dry patches and these valleys for a reason. They make us stronger.”