Well, I learned one thing attending Sunday’s debates between the candidates for U.S. Senate: Evidently the audience attending this showdown merited screening through a metal detector, a precaution that was not in place for last week’s exchange between those vying for the office of governor.

That screening turned out to be the most exciting thing about the showdown between Democrat Michelle Nunn, Republican David Perdue, and Libertarian Amanda Swafford. The hour-long session amounted to little more than a re-hashing of Nunn and Perdue’s negative campaign ads, with the occasional oddball interjection by Swafford. It would have been more efficient to stay home and watch the ads on the candidates’ Facebook pages.

On the other hand, it would have been more fun to watch the debate at home with a bottle of Woodford Reserve, taking a sip every time Perdue trotted out one of his scripted lines: “rubberstamp for President Obama,” or “here you go again.” Or drinking every time Nunn uttered “outsourcing,” or a variant thereof.

Perdue is nothing if not disciplined. Sticking to his talking points, he tried to tie Nunn to national Democratic policies at every opportunity. But Perdue—behind with female voters—undermined his own cause with a few nasty swipes. When moderator Russ Spencer passed along the inane voter-submitted request to “say something nice,” Nunn noted that she’d recently learned Perdue was a good golf player and Perdue and ungraciously sniped, “Your dad’s lying again,” drawing gasps from the studio audience. On the other hand, Perdue’s compliment to Nunn—“I respect you as a working mother”—came across as condescending.

The panelists asked about campaign ads, thus only fueling the candidates’ bickering. And then Spencer added fuel to the slugfest by lobbing Perdue a softball question about ads showing workers laid off at Pillowtex, one of his former companies. “It was a tragedy of national proportion,” intoned Perdue.

Nunn, for her part, pounded away on two themes: Outsourcing (we get it: David Perdue was a CEO who cut jobs and sent business to other countries) and her willingness to work across the aisle (we get it: You worked with George H.W. Bush). But she responded vaguely to several questions. (Would she support Harry Reid as Senate leader? Uh, maybe?) But if there was a winner in the debate, it’s Nunn by a sliver of a margin, if for no other reason than she showed the ability to think on her feet as well as recite campaign talking points. When Perdue dismissed a gender discrimination claim during his tenure at Dollar General as applying to only a fraction of the workforce, Nunn observed that, “two thousand women seems like quite a lot to me.”

While the Nunn-Perdue exchanges underscored the tight race, the presence of Libertarian Swafford served as a reminder the third-party candidate is a potential spoiler. Swafford presumably will siphon off independent voters from Perdue and female voters from Nunn. But her run-on responses about the evils of “big government,” her anxious demeanor at the podium, and her oddball queries (she asked Nunn about a Georgia Democrats mailer mentioning the Ferguson unrest and Perdue about a citizen blogger ejected from one of his events) did little to win either segment to her side.

The latest polling shows Nunn with a slight edge, the race tight, and Swafford eking out just enough votes to force a runoff. Sunday’s debate did little but reinforce that scenario. I don’t know about you, but thinking about the prospect of this dragging on until January makes me want a drink—or three. “Rubberstamp!” “Outsource!” “Big Government!” “Cheers!” 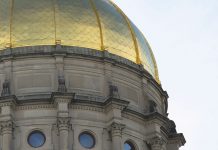