Several weeks ago, I was peacefully lying in bed drifting off to sleep when I felt a conspicuous, featherweight tickling sensation along my bare calf. I shrieked and instantly levitated, then ripped the covers off the bed. And there it was, right there on my sheets, trying to scurry back into the darkest and most sinister depths of hell from whence it came: a plump, glossy brown cockroach, antennae a-twitching.

This summer has felt like The Purge, except the villains have six legs and a thorax. Attempting to get from my car to my front door in Grant Park involves a series of maneuvers I can only describe as “speed tap dancing.” I have walked into my bathroom in the morning only to feel one scuttling over the top of my unshod foot before I even have a chance to flick the lights on. I have attempted to clean up a belly-up roach corpse, only to have it reanimate, escape the wad of toilet paper in my hand, and fly away. I’ve lived in Georgia my entire life, I spend lots of time outdoors, I’ve almost exclusively lived in very old houses, and I’ve never seen anything quite like it.

Plenty of my fellow Atlantans have, anecdotally, observed a worse-than-usual cockroach season this year. They’re dropping from the ceilings at night and landing on our faces. They’re setting up shop inside our liquor cabinets. They’re assembling armadas around our front doors. “I see them scurry through the streets at night,” Catie Leary, a downtown Decatur resident, tweeted recently. “One flew and landed on my shoulder last week. One crawled across a book I was reading, and I considered burning the book. Fear lives in my heart at all times.”

I, too, am stricken with fear.

In late July, my spirit finally broke, and I decided to dial a local exterminator. The curiously chipper employee on the other end of the line casually remarked that it’d been “a big summer for roaches” because, as she explained, Atlanta had gotten less rain than usual at this point in the season, forcing the creatures to seek hydration inside. According to the National Weather Service, July did indeed bring less rain than average—a mere two inches compared to last year’s eight. June, on the other hand, was up three inches from last year.

Later, when I asked Arrow Exterminators whether they’d seen an increase in roach-related calls, they said they had not. Orkin said they didn’t have specific data that could confirm my suspicions, but that an increase in roaches could be attributed to the wetter-than-average months early in the season—“plus, at this point in the year, many cockroach species have reached maturity and are more active because they are looking for a mate,” added Chelle Hartzer, an entomologist and technical services manager for Orkin, to my complete and utter disgust.

Equally horror-inducing: it turns out both of them might be right. Brian Forschler, a professor and researcher of entomology at the University of Georgia, says that too little rain will cause treeholes and other outdoor harborages to dry up and force roaches inside, while too much rain will drown out their harborages and, well, force roaches inside. In recent months, Atlanta’s had both. “There’s plenty of rational reasons, with the rainfall patterns we’ve had this year, that you’d see an increase,” Forschler says. This is especially true for the Smokey Brown cockroach, which, of the 120 roach species in Georgia, is one of seven that closely aligns itself with human dwellings—and the only one that can fly. “So,” I ask Forschler, “those are the worst ones?” He laughs. “That’s pretty subjective, but I’ll agree with you.” (Other common Atlanta roaches include the brown roach and the American roach, both of whom tend to thrive in urban environments and live in sewers and pipes. Since they like cities and Smokey Browns like trees, we have lots of both. Lucky us!)

Forschler says Smokey Brown roaches often pass through homes while migrating from hardwood tree to hardwood tree—like, for instance, the oak tree that towers over my front yard, the pecan tree in my backyard, or any of the other hundreds of hardwood trees surrounding my neighborhood. In other words, I and most other Atlantans unwittingly reside in Smokey Brown Valhalla.

“If you live in a pine lot, you’re not going to see Smokey Brown cockroaches as regularly around your house,” says Forschler. “But if you have hardwood trees, you’re going to—there’s just no way around it.” Most of the time, Forschler adds, you might spot a lone roach or two on its way to its next treehole, a humble nomad simply passing through these parts, not looking for any trouble. “But if you have the right conditions around your house,” he adds, “they’re going to stop and hang out, and maybe stay there for generations.”

As for getting rid of them? Not as simple as blitzing your house with pesticides, as it turns out. “You need to figure out what kind you have,” Forschler says. Treatment methods will vary based on the species and their respective habits. Regardless of the species, Forschler says that bug bombs are largely a waste of money, and while traditional baseboard spraying will kill a few, the multigenerational families of roaches hunkering down in your eaves or walls won’t be hugely affected. For dealing with Smokey Browns, Forschler recommends bait. “The bait has a slow-acting ingredient, so the animal doesn’t die until it gets back to the harborage, poops out some of it, and dies, so it provides a poisoned food substrate to everyone else who’s hanging out at the harborage,” he says.

I am fleetingly comforted by the thought of sending a compromised cockroach unknowingly marching back to wreak havoc upon its own den of horrors like a Trojan horse. Then, Forschler rocks me out of my brief moment of serenity: “Remember, Gray, if you see them in your house, it probably means that you’ve got ’em somewhere in a wall void.” At this point I consider putting the call on mute, crumpling to the floor, and wailing inconsolably for several hours. But Forschler offers me some small solidarity: “I don’t think there’s a house in Georgia that hasn’t had signs of a Smokey Brown cockroach infestation in the walls at some point in time.”

60 Voices: 8 of Atlanta’s essential workers on what the past year taught them about the city 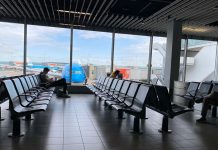