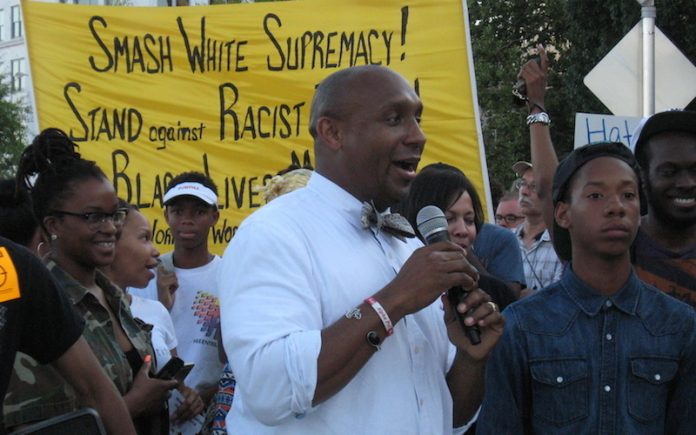 A march and memorial service held Friday night in Atlanta lamented this week’s deadly shooting in a historic African American church in Charleston. Speakers and participants connected the massacre in South Carolina to larger issues of violence and racism—and the national #blacklivesmatter movement.

Georgia NAACP state president Francys Johnson said that office-holding “extremists” who block hate crimes legislation should be held accountable for incidents like this week’s shooting in Charleston. “It is they who must answer for the lack of justice,” Johnson said of politicians who do not acknowledge a connection between violence and racism. “The logical conclusion of racism is genocide,” he said.

Johnson’s address in the sanctuary of Big Bethel African Methodist Episcopal Church capped a march of about 200 activists, who had made their way from the state capitol steps to the church in Atlanta’s Sweet Auburn district in memory of the nine people killed in Wednesday’s shooting at Emanuel AME church.

Big Bethel and Emanuel are both iconic institutions in the civil rights movement, and senior pastor Rev. John Foster said that the churches also shared a connection in this week’s events. Denise Quarles, a member of Big Bethel and the City of Atlanta’s former director of sustainability, lost her mother Myra Thompson in the attack, said Foster. “There is a kinship between Big Bethel and Emanuel,” he said. “We’ve both been burned down. We’ve been praying for Denise. We want to be a blessing to her.” From the pulpit, Johnson also invoked the deadly police shootings of 12-year-old Tamir Rice in Cleveland and 18-year-old Michael Brown in Ferguson, Missouri, as well as the deaths of Freddie Gray in Baltimore and Eric Garner in New York, and other high profile incidents involving police force against African Americans. He issued a broad call for justice, connecting the Charleston shooting to the #blacklivesmatter movement.

In a sense, Johnson preached to the choir. State Sen. Vincent Fort and Atlanta city councilman Kwanza Hall, sitting in the pews after the march, both favor changing hate crimes legislation at the state level.

Georgia civil rights attorney Mawuli Davis, a march organizer (pictured above), made the connection explicit during a brief interview at the outset of the march. “We have to stay on the path that black lives matter,” Davis said. “The underlying fabric woven into the fabric of society is a disrespect and disregard for black life. It resonates through police and other places. This is an extreme expression of the cultural roots of American society that has to be rooted up and destroyed.”

Fort compared conditions today to that of Alabama under the governorship of segregationist George Wallace in the 1960s. “Every politician that uses code words like ‘thugs’ and other words at this state capitol are creating an atmosphere to allow people like this to perpetrate murder and terrorism,” he said. “Let us mourn tonight and let us stand up and organize tomorrow. Or else our presence here is a fraud.”

The demonstration was peaceful. Marchers sang hymns as they made their way down Piedmont Avenue, interrupted at one point by two young white people in a silver pickup truck who chanted “Black or white, guns are right!” at the procession. They refused to identify themselves.

But people plainly remain furious, and are searching for ways to channel that anger into productive action. “I think if we knew the answer, we would have done it already,” said Katlyne Hill, 38, of Lithonia, as the march made its way through downtown. “We have to keep pushing, just like our forefathers did. They went out every day and were attacked every day. … I have some friends who say it has to be better because we have an African-American president, but I’ve never seen it like this before. Every week, I turn on the news and someone is being gunned down for the color of their skin. It’s worse. I think it’s gotten worse.”

“We need to make space for the anger, the righteous rage,” said Aurielle Lucier, a march organizer and a cofounder of the It’s Bigger Than You campaign for social justice (right). “It is something that has been nestled in us for so long. We’ve had young people that have hitting these streets since August. … when does it end?” 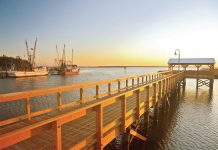