Ahmaud Arbery. Breonna Taylor. George Floyd. These three names set our hearts, region, and country ablaze this week. People—rightfully fed up, angry, and frustrated with another unjust murder by the hands (knees) of the police—took their voices to the streets to advocate for reform. Some protests turned violent. People got hurt. Police overreacted. Property was damaged. We all held our breath as the curfews started. But the sun rose on Monday.

In one weekend, Atlanta evoked again its totem of the phoenix. Will we rise from the ashes of inequality, anger, and violence to become a more resilient and equitable city? This challenge is not new to Atlanta. Sherman, the Atlanta Child Murders, the Olympic Park bombing, floods, recessions, the riots following the Rodney King verdict—nothing seems to stop our ability to push forward. Our history is a point of pride and one of our biggest attributes. The phoenix leaves the ills of the past behind in its ashes. But historically, Atlanta also has left behind vulnerable populations, long-time low-income Black residents, and other disinvested communities as it works to quickly respond to tragedy and adversity with a new and improved image of itself. It’s called the “Atlanta Way”.

Whenever critical problems present themselves, the region’s civic and business communities—Black and White—band together to fix the immediate problem but forget to include all communities in the process. When the I-85 bridge collapsed, we all rallied behind the construction crews to get us moving through the city again. But, two years later, when it came time to get the whole region moving by expanding MARTA, the majority of Gwinnett County’s residents voted no. The unfounded belief persists that public transit and its Black patrons will increase crime rates and decrease property values. Ironically, more of the Atlanta metropolitan region’s poor residents live in the suburbs than in the city of Atlanta. Our region has the country’s fourth highest rate of suburban poverty.

The Atlanta Way has never considered the damage its inequitable growth trajectory has had on Atlanta’s most vulnerable, who face systemic barriers that inhibit their ability to participate in and benefit from its expansion. Life expectancy in Buckhead is almost 20 years longer than in Bankhead, a few miles away. A child of color born into poverty in Atlanta only has a five percent chance of moving up the economic ladder, according to the Brookings Institute.

More than 50 years ago, Dr. King said to eight white Southern faith leaders: “We are caught in an inescapable network of mutuality, tied in a single garment of destiny. Whatever affects one directly, affects all indirectly.” Those words have more meaning today in our hyper-connected world than ever. It’s now much easier for us to see on social media—and be affected by—the lethal injustices against our brothers and sisters. And once we see, we can no longer consciously separate ourselves by social class, race, or convenience. What hurts one of us hurts all of us. Further, if strategies and solutions proposed by political, business, and civic leaders do not work for us all, they work for none of us. The faster we understand these truths, the faster we’ll find our way forward in picking up the pieces after COVID-19 and these uprisings.

This time of unrest offers the chance to take a different path forward and lead the Atlanta region, the South, and the nation toward a more equitable future. We must take the lessons (both good and bad) from our courageous past to realize a New Atlanta Way. A way that is more inclusive, regenerative, and just. Mayor Ivan Allen used the power of his office to rally the civic community around Dr. King so Atlanta wouldn’t suffer the fates of other Southern cities stifled by Jim Crow. Mayor Maynard Jackson pushed for economic inclusion in ways that paved the way for the economic crown jewels we wear today—the world’s busiest airport and Tyler Perry Studios. Mayor Keisha Lance Bottoms defied the national and local rush to reopen, which may have helped save lives. It’s time for us to rise courageously from the protests in a way that includes everyone.

If we take this chance to illumine a new vision in Atlanta, the rest of the nation can see that living equitably is not only possible, it’s essential. Our time is now.

Nathaniel Q. Smith, Jr. is founder and Chief Equity Officer for the Partnership for Southern Equity (PSE), which works to advance racial equity and shared prosperity for all in metropolitan Atlanta and the South. Among PSE’s notable accomplishments are the creation of the South’s first equity mapping and framing tool, the Metro Atlanta Equity Atlas, and securing BeltLine tax allocation district funds for affordable housing. PSE also led a coalition of diverse stakeholders to support a $13 million referendum that expanded Atlanta’s transit system into a new county for the first time in 45 years. A child of the Civil Rights Movement and Atlanta native, Smith holds a Bachelor of Arts in Urban Studies from Morehouse College and a Master of Science from the New School. He is also a member of Atlanta magazine’s editorial advisory board. 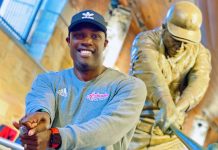