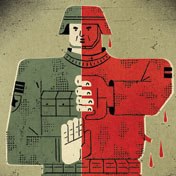 Researchers at Georgia Tech have engineered “designer” blood clots—artificial platelets that could enhance the body’s natural clotting process and mitigate painful scarring. In animal trials, the platelets reduced clotting time by 30 percent. The clots offer particular potential for battlefront use; an injured soldier could inject the freeze-dried synthetic material on the field, using a device the size of an iPhone.

Dr. Thomas Barker, an associate professor of biomedical engineering at Georgia Tech, runs the Matrix Biology and Engineering Lab, which developed the platelets. We asked him for a crash course in matrix biology.

What does your lab focus on? We study the development of embryonic tissues—in particular, the role of the extracellular matrix (ECM) in the process of tissue development. More recently—in the last two decades or so—there’s been a greater appreciation of the fact that this structural network plays an important biochemical role.

For those who aren’t biologically inclined: What’s an extracellular matrix? All of the stuff outside of an individual cell. What’s holding the cells together is an entity, a combination of fibrillar structures—think of cables that are holding things together and springs that are pushing things apart.

Can you describe the clotting process in layman’s terms? Whenever a surgeon makes an incision, or I cut myself out in the yard, the body triggers what’s called a clotting cascade. Then the body deposits the protein fibrin [part of the extracellular matrix] in the wound. Fibrin plus platelets form a clot, and the bleeding slows.

How did your clotting research begin? When we created the synthetic platelets, we were trying to do something completely different: combine two polymers [complex molecular chains] together for wound repair. But the polymers acted like platelets. I tell people we tripped over a diamond.

What’s your ultimate goal? Our metric for success is to have a product in clinical trials in three to five years and, ultimately, a commercially available product for bleeding disorders.

Are there potential side effects? We evolved antibodies to bind with one form of fibrin—specifically the polymerized form. This is important because precursor fibrin circulates in your body right now. If our device triggers the clotting system prematurely, all the blood in your body will clot—we would have made really expensive snake venom. Also, we don’t know how long the artificial platelets will circulate through your body, potentially causing heart attacks and strokes. We angle our research toward military applications because of the side effects. If your patient population is wounded soldiers eight to ten hours from seeing a physician, it becomes easier to use a product like this—knowing there may be adverse side effects—when death is inevitable otherwise.