Home News & Opinion From the Magazine From a side hustle to an empire: how Waffle House became a...

Before Waffle House became a 24/7 beacon for patty-melt addicts and hashbrown aficionados, it was really just a side hustle. On Labor Day 1955, next-door neighbors Joe Rogers Sr. and Tom Forkner opened a restaurant in sleepy Avondale Estates. Named after the most popular item on the menu, the restaurant had a simple objective: serve delicious food around the clock. By the end of the 1960s, Rogers, a manager at another restaurant chain, and Forkner, a real-estate agent, had quit their day jobs and opened nearly 50 locations throughout the Southeast. Decades and more than 2,000 restaurants later, Waffle House has hosted weddings, celebrity brawls, and more moments of authentic Americana than a TV-show writer could dream. The original Avondale Estates location on East College Avenue, now a museum open only for tours and special events, still stands. But no fear: There are six locations in a roughly three-mile radius that are happy to serve. 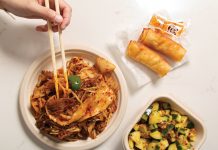