Home Give Atlanta GIVE Atlanta Celebrates Five Years of Philanthropy, Fundraising, and Awareness

Atlanta is a city on the rise, always reaching for more and the next. That’s evident in the city’s economic growth, business innovation, and how it attracts the best and brightest talent from around the country. Thanks in part to challenges like GIVE Atlanta, it’s also a hotspot for generosity.

In 2016, Atlanta magazine’s president and publisher Sean McGinnis set out to create a dynamic program that would raise funds and awareness for metro Atlanta’s nonprofit sector as an extension of the sponsorships that the magazine already provided. “It made perfect sense to formalize our efforts on an annual basis and to create a new program that the entire community could rally behind,” McGinnis says. “The GIVE Atlanta program provides an opportunity for deserving nonprofits to benefit from the magazine’s extensive print and online audience, while also participating in a focused and strategic online giving challenge to raise donations for each nonprofit or cause.”

To refine the concept, McGinnis tapped other visionaries, including Elyse Hammett, vice president of marketing and communications for the Community Foundation for Greater Atlanta, which has been connecting donors with nonprofits since 1951. In one of the initial meetings, “We realized that we were more than dreamers. We were builders and believers in Atlanta’s long view over a quick fix,” Hammett says. “We knew that if Sean and the [Atlanta magazine] team could build a sustained model through GIVE, we could create a family of givers.”

The first challenge launched in 2017, and participating nonprofits had the opportunity to win cash prizes, advertising in the magazine, and build awareness. “Atlanta is the fifth most giving city in the nation,” Hammett explains. “We wanted to encourage Atlanta to look deep at what its needs are and get educated about the giving landscape and what can really happen when you put optimism and opportunity to work.”

Metro Atlanta and North Georgia nonprofits sign up to be a part of the campaign. With that buy-in, they get a display advertisement in the GIVE Atlanta editorial and access to a communications toolkit to help boost their messages. During the month-long challenge, nonprofits have the opportunity to win $20,000 in cash grants and more than $160,000 in advertising space.

In order to stand out among other engaged nonprofits, organizations leverage their social media platforms and existing donor lists to encourage participation. The charities don’t have to go it alone, even if they don’t have all of the promotional infrastructure in place. Atlanta magazine partners with Mightycause, a nonprofit management platform, to offer one-on-one support and webinars to build out a custom profile page, help send customized emails to prospective donors, provide social media templates, and have access to real-time leaderboards to track their progress.

It’s a win-win for both the donors and charities, says Bethany Natoli, the VP of community engagement for Mightycause. “Through prize money and in-kind advertising that Atlanta magazine gives away, the nonprofits have an extra incentive to drive their fundraising,” she says. “Donors giving to a nonprofit during the GIVE Atlanta campaign know that their donations can go even further and have even greater impact.” The platform also allows the organizations to activate ambassadors to create fundraising pages and makes it easy to set up automatic matching grants through willing individuals or companies.

The innovative approach appeals to an array of nonprofits. Participating organizations have run the gamut, from Atlanta Humane Society and CURE Childhood Cancer to The Empty Stocking Fund, Gateway Center, and a host of others. “Watching the leaderboard in real time and sparking a spirit of friendly competition makes the challenge far more engaging than a typical [fundraising] appeal,” says Amy Estes, Richmont Graduate University’s director of development and donor relations. “The challenge can really bring energy to the annual fund drive.”

Pairing the challenge with compelling stories has been a key component of the challenge. Lori Johnston, who served as the founding editor of GIVE Atlanta magazine, recognized the potential to highlight the impact of the nonprofit community and the people supporting it. “From that small individual donor or a child who’s donating to Arthur Blank and Bernie Marcus and the incredible amounts they’ve given to so many different causes, I thought it was great that we could shine the light on that,” Johnson says.

One year, GIVE Atlanta magazine interviewed local celebrities like SPANX’s Sara Blakely, Grammy Award–winning musician Kristian Bush, and WSB anchor Jovita Moore about the causes dear to their hearts. Another issue highlighted start-up brands offering their goods to raise money, while still another profiled the next generation of philanthropic visionaries making a mark on Georgia’s landscape.

While one-off donations can be a welcome stopgap, building long-term donor and volunteer relationships is pivotal for participating nonprofits, because engaged patrons tend to make ongoing support a priority. “Many new donors have discovered Jewish Family & Career Services through our participation in GIVE Atlanta,” says Chantal Spector, JF&CS’s senior marketing manager. “Last year especially, prospective donors saw how essential our services were to Atlanta and supported [us].” The organization has been serving Atlanta since 1891 and offers counseling and therapy, programs for seniors, services for adults with developmental disabilities, a food pantry, emergency financial assistance, and dental services at the Ben Massell Dental Clinic.

Camp Kudzu, which serves children and teens living with Type 1 diabetes, has participated in the challenge multiple times. Vice President of Development Desirae August says that they’ve garnered a host of new supporters and reconnected with existing ones through their GIVE participation. “It gives our organization the visibility to engage new donors, and gives our loyal supporters an opportunity to help us achieve our goals and win additional prizes,” she says.

Participating GIVE nonprofits capitalize on the opportunity to reach new audiences and keep their cause top-of-mind for existing ones. While Giving Kitchen is an oft-publicized entity on Atlanta’s nonprofit landscape, co-founder and Senior Director of Community Engagement Jen Hidinger-Kendrick says participating in GIVE helps remind the food service workers they serve that there is assistance available if they’re facing a health challenge. “Having a fundraising opportunity like GIVE Atlanta helps us continue to share our mission to thousands of food service workers and reminds them that Giving Kitchen and this community has their backs,” Hidinger-Kendrick says. “The greatest gift is when others help spread the word and share our mission. Every time someone shares what we do, the value is huge and very impactful.”

It’s impossible to talk about the difference-making impact of the GIVE Atlanta challenge without highlighting Furkids. Georgia’s largest no-kill animal shelter and rescue organization has come out on top every year, winning a total of $445,801 since 2017. CEO and founder Samantha Shelton says there’s no secret to Furkids’ winning approach. “We’re all in. We work hard for it, and we are fully focused on it for the full duration of the campaign. During the campaign, we’re constantly sharing our story and the impact [donors’] support has.” Shelton also sees tremendous value in networking with other top north Georgia nonprofits to amplify everyone’s messages. “We love the friendly competition between the charities. It’s a great platform for us to reach not only our existing database of supporters but also new donors,” she says.

How You Can Help

The 2021 challenge runs October 19 through November 9 at giveatlanta.mightycause.com. Interested individuals can see challenge updates and ways to give on the website, on Atlanta magazine’s social media channels, and by following the participating charities. Then, they can give generously to the causes that resonate most. “There will always be a need to raise awareness and financial resources for Atlanta’s nonprofit community,” McGinnis says. “I believe it’s part of our duty and responsibility as the city magazine to help shine a spotlight on these deserving causes.” 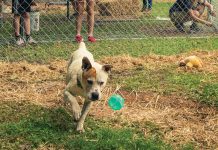