Everybody knows political parties draw state and Congressional voting districts to favor their side, but seldom do politicians flat-out admit it.

“Paul Broun is an ally of the governor, someone whose interest we would like to look after,” Robinson said. “We wanted him to have a good district to run in.”

In other words, dear voters of Georgia’s 10th Congressional district, the lines were redrawn to meet the GOP’s needs, not yours. 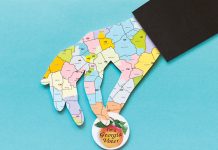 How redrawing districts has kept Georgia incumbents in power