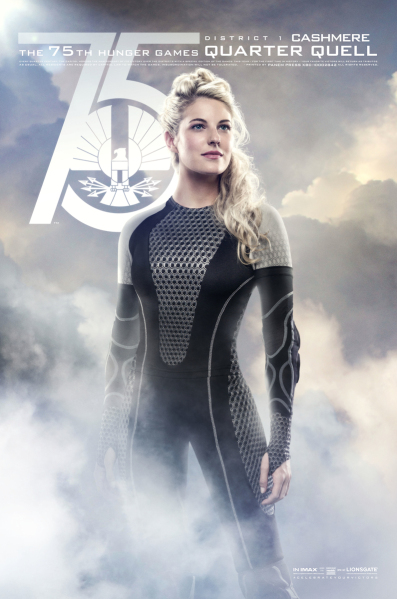 It’s battle time. Today, Hunger Games: Catching Fire, the second installment of Suzanne Collins’ sci-fi novel trilogy turned blockbuster films, is hitting theaters everywhere. If you’re as stalky as we are, you already know that much of the movie was shot in and around our not-so-post-apocalyptic city last year. The Atlanta History Center and the Goat Farm were key filming sites, and Jennifer Lawrence, Liam Hemsworth, et al were spotted around town at spots like Netherworld Haunted House and Watershed on Peachtree.

So of course we’re pumped for a Peach State battle backdrop in the 75th annual Hunger Games. But before you go all rooting for kindhearted Katniss, consider this: We have our own district tribute in the fight with Atlanta native Stephanie Leigh Schlund, who plays Cashmere. And she’s not just any tribute: She’s from the beautiful, bloodthirsty District One, where career tributes are hardened from birth for vicious war. (A lot like drivers on I-285 at rush hour.) This makes her Katniss’s biggest competition—and Schlund goes head-to-head with J. Law herself. We caught up with the dagger-flinging phenom to talk fights, her hometown, and her costars. May the odds be ever in her favor.

For those of us who don’t know, can you describe Cashmere?
She is a mass manipulator. She’s from District One and she’s been trained to kill. So she’s very resourceful and uses whatever she has to win. And she really views Katniss as her nemesis—I think Cashmere is used to being the beautiful one, and then Katniss enters, and she’s not only beautiful but she’s really loved on an emotional level by the people at the Capitol. So she really becomes jealous.

I assume you’ve read the books—did you inject your own spin on the character?
I’m a huge fan of the series. Suzanne Collins did a beautiful job of fleshing out the characters with so much information. But I really had to understand who Cashmere was and where she was coming from. And at the end of the day, she’s still a human being and she is being pulled back into this arena, which she is supposed to be exempt from. So whatever emotions were going on in that in-between time from her first victory till now, those resurface, and I had to figure out what those were.

Was it hard adopting that manipulative personality?
Yeah. Cashmere is the total, total opposite of who I am personally. But my job as an actor is to do what I’m asked to do in the moment. So I walk in and I perform, and I’m not really a method actor—I know when to switch it on and switch it off—and once I really figured Cashmere out, it was easy to do. But it took a little bit to get into the character just because I felt so bad being so vile to everyone. That was new!

So are we going to see you in some epic fights?
Yes, yes. Cashmere is vicious and she exudes a lot of that in her physicality.

How did you train for that—and for those dagger moves?
We trained for four months before we started filming, and we trained during filming as well. I not only had to learn tricks with the daggers, and to stand there looking intimidating while flipping daggers, but I also had to learn fight sequences that were individual and choreographed with the guy who plays my brother [Gloss], Alan Ritchson. It was a lot of work.

So you know how to use real daggers now?
Yeah, oh yeah.

What can you do?
Tricks with one hand. Toss them across the room to hit a bull’s-eye. I’ve got pretty good aim at this point.

What was your daily routine like while training?
I was on a very strict diet, so I would get up and have my strict breakfast and then I would go into training and we would work for about three to four hours at a time in a warehouse, and then I would crawl out of there, literally drenched in sweat and exhausted.

What was the most fun part about being in Hunger Games?
Probably the costumes. Trish Summerville is one of the most brilliant wardrobe stylists. I would walk in every day and be stunned by the things that were hanging on these racks. Pieces that looked like they should have been in a museum, I was putting on my body.

Like your tribute uniform?
No, the tribute uniform is probably the most basic thing. The reaping scene, the parade, the interview scene—these are the scenes where the costumes are out of this world.

What part of town did you grow up in?
I grew up in Rockdale County, and then my family moved to Lake Oconee—they’re still there.

How did you start your acting career in Rockdale County?
It was just something I’d always wanted to do, and I finally convinced my parents when I was sixteen years old. [Her first real gig was as a model on The Price Is Right.]

You live in L.A. now. How much time do you spend around here?
Well, it’s funny—I’d say about 70 percent of the jobs I book film in the Southeast, so I’m always coming back for work.

And were a lot of your parts in Hunger Games filmed here?
Yeah! I did the majority of my filming in Atlanta, actually. And I just stayed at home. It gave me a great opportunity to be at home with my family and spend some time with them.

I was able to bring my sister on set a couple of days. And it was really fun for me because I got to experience it all with my family by my side.

Did you get to teach any of the other cast members—like Jennifer Lawrence and Josh Hutcherson—anything about Atlanta? Like where to go to dinner or anything?
No, they were teaching me stuff! I’m such a hermit. I never go out to clubs or anything. But when you have a cast full of energetic people who love to dance, they’ll teach you a thing or two.

Name a memorable moment with the stars.
The moment I met Jen, I was stretching on the floor after a day of training. In walks J. Law, and I’m drenched from head to toe in sweat, with my hair sticking out all over the place, and I’m breathing so hard I thought I was about to pass out. Not exactly the perfect meeting I had pictured.

So what’s next for you?
CBS has a new show called Reckless coming out in January, and I play the role of Missy Reynolds. And there are a couple of things in the works that I can’t mention yet.

Your character on Reckless, is she anything like Cashmere?
Yes, actually she’s identical, except she doesn’t have weapons! I don’t know how I keep booking these horribly dreadful women.

Last question: Liam or Josh?
Not answering that one!