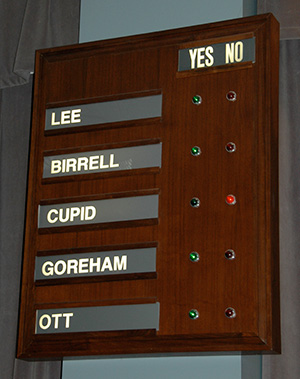 Cobb County commissioners agreed Tuesday to a two-week delay before voting on new zoning rules for keeping backyard chickens. But they wouldn’t postpone a much more contentious decision on $8 million a year in new taxes to subsidize the Atlanta Braves.

Opponents objected that new information on who would be taxed to help finance a new stadium for the Braves had only become available this week. Previously released maps of new tax districts, they said, were poorly reproduced and virtually unreadable.

Speakers also scolded commissioners for proceeding even though snowy weather had canceled or curtailed two prior hearings on the Braves financing plan. A Feb. 11 hearing was held even though Gov. Nathan Deal had declared an emergency and urged Georgians to stay at home because of icy roads.

“Anything that’s done out of order legally … creates an environment where we say, ‘We don’t have to follow the law as long as we’re pursuing an attractive goal,’ ” Tea Party activist Larry Savage said. “When you have that mindset, it’s almost impossible to imagine all the things that could go wrong.”

In response, commissioners said they had met all legal requirements for advertising and conducting the hearings.
Commissioners proceeded to approve a new 3 percent tax on rental cars, expected to generate about $400,000 a year for stadium financing. They also created two new tax districts in the Cumberland Mall area, where office and commercial property owners and hotel guests will pay a projected $7.9 million more annually for the same purpose.

Each decision came on a 4-1 vote. Commissioner Lisa Cupid, who cast each no vote, said she supported the stadium but felt the county had broken its promise to fully inform Cobb residents about each step in the process.

In an email sent to constituents at 3 a.m. today, Cupid said she was persuaded “when a member of the public stated that the Board did not follow through on a commitment to create a communications plan with milestones and deliverables surrounding the Stadium deal.”

“Consequently, I asked before the first Braves-related vote tonight for the Communications Director [Robert Quigley] to at least address the county’s intent to provide the detailed plan to the public and to commissioners,” Cupid wrote. “My desire was for him to assure the public and me that we were still headed in the right direction in producing the timeline as committed. With his assurance the public may have felt more comfortable and I could have felt more comfortable in voting in support of the resolution and ordinances.

“Unfortunately, Mr. Quigley was told not to address my comments.

“When this occurred my position hardened. I felt denying him the opportunity for explanation was a sign of something problematic. Of note, since joining the Board in 2012, I cannot recall a time where staff has been outright deterred from addressing any commissioner’s concerns during a BOC vote.”

Opponents also complained that funding for public safety, transportation, and other needs should take priority over subsidizing nearly half the cost of a new $672 million baseball stadium. A few hours earlier, officers had packed the commission’s meeting room in support of pay, staffing, and equipment improvements for the Cobb police department; several speakers said said low morale, aging police cars and officer turnover had brought the agency to a crisis.

Tea Party activists have promised to file a lawsuit to challenge public financing for the stadium. Savage, who lost a 2012 race for Cobb Commission chairman, contends Georgia’s Constitution and state law bar Cobb from bar Cobb from creating the new tax districts; he read the relevant portions aloud at Tuesday’s hearing, as if to create a record that could be cited in potential litigation.

Also Tuesday, the state House Judiciary Committee tabled a bill that would have protected personnel and payroll records of the contractors who will build the Braves’ stadium from public disclosure, effectively killing the measure for this session.

Two Cobb legislators were among the bill’s sponsors, prompting speculation that it was intended to cloak stadium construction records.

The scope of the bill was much broader, though, and would have applied to virtually any government contract. Lobbyists representing state and national business groups and the state’s general contractors had all endorsed the bill at a Monday hearing.