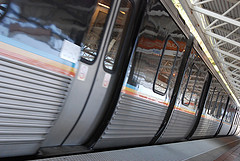 Yesterday evening North Fulton residents convened at Alpharetta city hall to learn about and discuss a proposed MARTA extension from the North Springs station to Windward Parkway. Miscommunication about the start time required MARTA’s Janide Sidifall to give two back-to-back presentations, in which she emphasized that the project was in the “early scoping” phase—the first step in a six-to-twelve-year process—and nothing is set in stone, including federal funding. But so far MARTA has identified a preferred alignment along GA-400 (they don’t know which side of it) and three possible modes of transit: heavy rail, light rail, or bus rapid transit. The agency has also identified six possible station locations but cautioned that further feedback and analysis could move things around.

The larger purpose of the meeting was to hear input from the community. After Sidifall’s second presentation, a dozen or more hands shot up, each a question or comment about project specifics. What would the stations look like? Why no station at Old Milton Parkway? Would Forsyth County residents get a free ride? (Alpharetta is located in Fulton, where the penny MARTA sales tax is in effect.) Attendees could also leave feedback on comment cards. But all who spoke seemed in favor of the project.

Though one South Forsyth resident voiced his support for bus rapid transit out of concern over funding, the clear favorite mode among attendees of the second presentation was heavy rail. “I appreciate heavy rail because it’s more convenient and faster,” said Judy Lyon of Alpharetta.

The GA-400 project is the least studied among three proposed MARTA expansions. The others are along the Clifton Corridor and along I-20. MARTA CEO Keith Parker told the Saporta Report that it is not a particular favorite.