Just before Labor Day weekend, Allstate insurance released its annual report of America’s Best Drivers. In a result that should surprise exactly zero Atlantans, our city ranked 186 out of the top 200 most populated U.S. cities, four spots lower than the 2017 report.

There are a few caveats with this data. It only studied Allstate insured drivers, and it tracked the number of accidents that occurred to those drivers from 2015 to 2016. Regardless, Atlanta’s place near the bottom shouldn’t come as a huge shock for anyone who has navigated the Connector at rush hour.

According to the report, Atlantans with Allstate insurance were 60 percent more likely to file an insurance claim than the national average, and on average filed claims every 6 years. In contrast, the No. 1 city, Brownsville, Texas (located on the southernmost tip of the state near the Mexico border) had nearly 14 years between claims, and drivers were 26 percent less likely than the national average to file a claim.

The report also notes that Atlantans had nearly 30 “hard-braking” events per every 1,000 miles driven, as measured by the company’s Drivewise app, which uses a phone’s location services and accelerometer to measure driving performance. Curiously enough, when looking at the surburban metro statistical area that includes Sandy Springs and Roswell, that number decreased to 24 “hard-braking” events.

According to Nerdwallet, Allstate is the fourth largest insurance company in the U.S. So are Atlantans covered by the first three—State Farm, Geico, and Progressive—any better? We can’t say for sure, but based on the amount of accidents we see on a daily basis, and how congested the city roads are in general, we’re going to guess probably not. 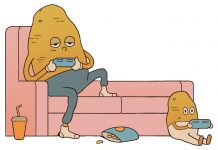 Tell us: You know you’re an Atlantan when…