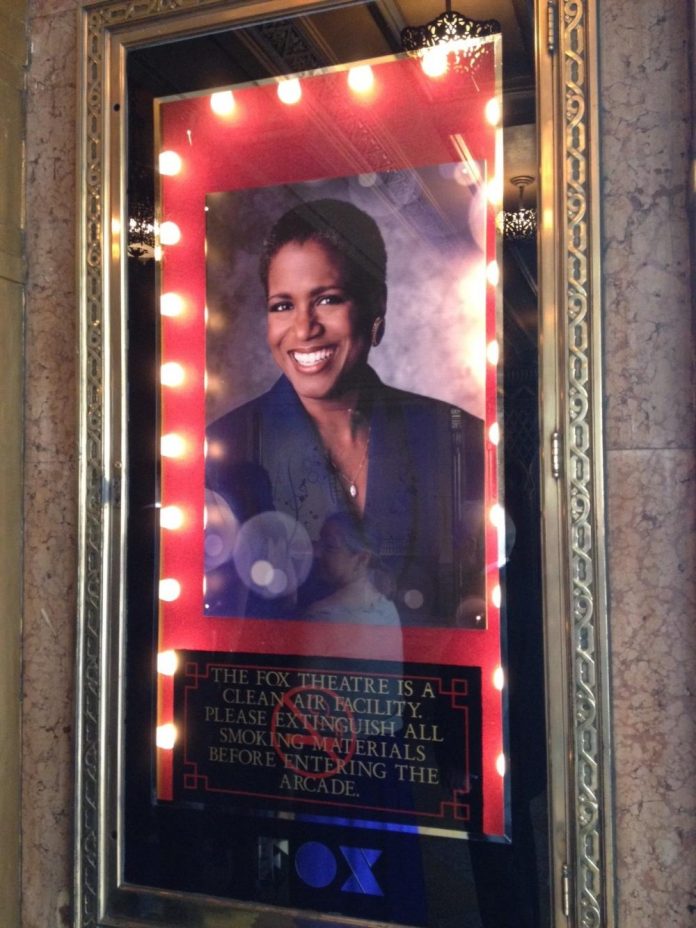 Moments into WSB-TV’s “Salute 2 Monica” black tie gala in the Fox Theatre’s Egyptian Ballroom Wednesday night, the honoree was busy honoring others as she celebrated her 37-year trailblazing career as Action News anchorwoman. “You need to meet this man,” Monica Pearson explained to us, introducing former Louisville WHAS-TV general manager Ed Shadburn. “Mr. Shaburn gave me my first job in television. He had to be here tonight!” The elderly man, driven into Atlanta by his son for the occasion, beamed at his former news anchor.

Hundreds of formally attired guests arrived at the private dinner, strolling past photos of Monica Jones Kaufman Pearson from throughout her career adorning the Fox marquee signs and onto a blue carpet, inspired by the anchor’s favorite color.

“Can you believe this?!” Pearson reflected to us in a quiet moment as she found a pocket of air conditioning to cool herself. “I love this. I didn’t think I wanted a big party. I never knew there was this side of me! But to see all my wonderful friends and WSB family here tonight is just amazing. I’m at a big house party with my friends except it’s at the Fox!”

Martin Luther King III, standing next to wife Arndrea, reflected on Pearson’s role as a trailblazer. “She set the tone and opened the doors for every African American female anchor that followed,” he said. “But Monica’s success can be completely attributed to her abilities. She just happened to be African-American. Her success is also a tribute to the remarkable leadership in this city. When Dad won the Nobel Peace Prize in 1964, there were those in this city who did not want to honor him in his hometown when he was being honored in New York. It was men like Robert Woodruff, Ivan Allen, Sam Massell, Maynard Jackson, Andy Young, and the list goes on who made the difference and pushed us forward.”

But Atlanta’s most recognized media figure didn’t reach iconic status without a few frightening moments. Former WSB sports director Chuck Dowdle (and the only person who’s ever called Pearson “Monny” on-air) recalled to us the summer of 1989 when he was summoned to the general manager’s office where the head of security was waiting. As always, Dowdle and Pearson were set to host the annual “Salute 2 America” parade that was being rerouted to mark the centennial of the Georgia State Capitol building. Pearson had received a death threat and the station was taking the threat seriously. “They gave me an out to take the day off,” Dowdle recalls. “I thought, ‘Great, I’m getting July 4th off!’ Then I asked, ‘What’s Monica going to do?’ and the manager said, ‘Oh, she’s doing the parade.’

During rehearsal at the capitol that morning, the pair’s jitters got the better of them as the governor was commemorating the capitol behind them. The ceremony finale? A 21-gun salute. Dowdle says he and Pearson dove for cover. Shaking his head, Dowdle said, “I’m glad we lived to laugh about it! How could anyone threaten her life, knowing this person and knowing her heart, is just beyond me.”

Atlanta mayor Kasim Reed grew up watching Pearson on air. “For 37 years, she’s been a part of my life and this city’s life,” Reed told us. “I can’t imagine life without her. I’m waiting to see. I have a suspicion this is all a ratings gimmick!”

Carolyn Young, the wife of Ambassador Andrew Young echoed Reed’s thoughts. “Monica will always be Atlanta,” she reflected. “We simply cannot do without her. She will always be in our hearts, our spirit and our city.”

Young’s brother Dr. Walter Young said Pearson’s chief competition for the WSB job in 1975 did the city a favor by not getting the position. “Oprah did us a real favor,” he explained with a twinkle in his eye. “Monica has served the city and our community so well.”

Inside the ballroom, over a sumptuous dinner of herb-crusted beef filet, rosemary roasted sea bass prepared by A Legendary Event, Pearson was surprised by the evening’s guest emcee, “Good Morning America” co-anchor Robin Roberts, who despite her recent MDS diagnosis, was determined to fly in from New York to honor a mentor. “There was no way I was going to miss this!” Roberts told Pearson, seated at a front table with her husband John, daughter Claire and mother Hattie.

And then Oprah Winfrey herself showed up via a video message. “OK, you beat me,” Winfrey joked on screen as the Fox crowd laughed and applauded. “I think things worked out for the both of us. I bow to you. Congratulations!”

The evening ended with Atlanta singer Theresa Hightower and Pearson dueting on the sultry jazz standard “Fever” on stage before guests departed and encountered an equally sultry summer storm that temporarily transformed Peachtree Street into the Chattahoochee River.