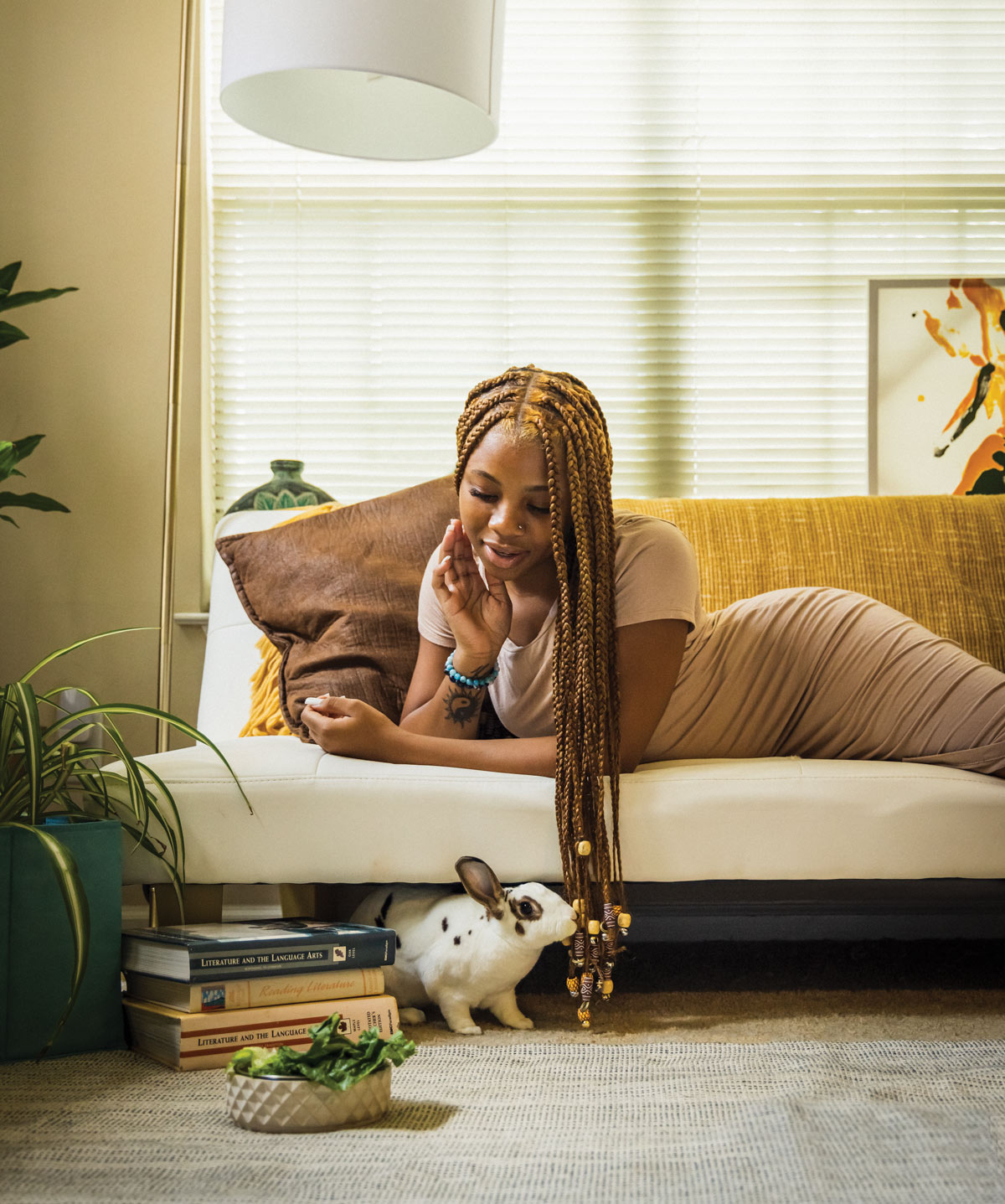 I’m sure that my teenage daughter, Kennedi-Rae, was surprised that I said yes to the bunny. When her older sister, Kamani, moved out to be closer to her college in the city last year, Kennedi found herself lonely—and quarantined. Her close friend, who had just adopted a Mini Rex, made Kennedi realize that she wanted one, too. And, so, all things considered, I said yes. Up until then, we had only had a turtle, which we had tearfully surrendered when we couldn’t keep pace with his aquarium needs. But, Kesi—she roams free and unfettered. She’s partial to Romaine lettuce and Timothy hay; she does a mid-air shimmy called a “binky” when she’s thrilled; she licks your toes when she wants to be petted; and like us, loves to chill in the sunroom. If her now permanent place on my phone’s screensaver is any indication, I have become the bunny granny I was apparently meant to be. —Kamille Whittaker 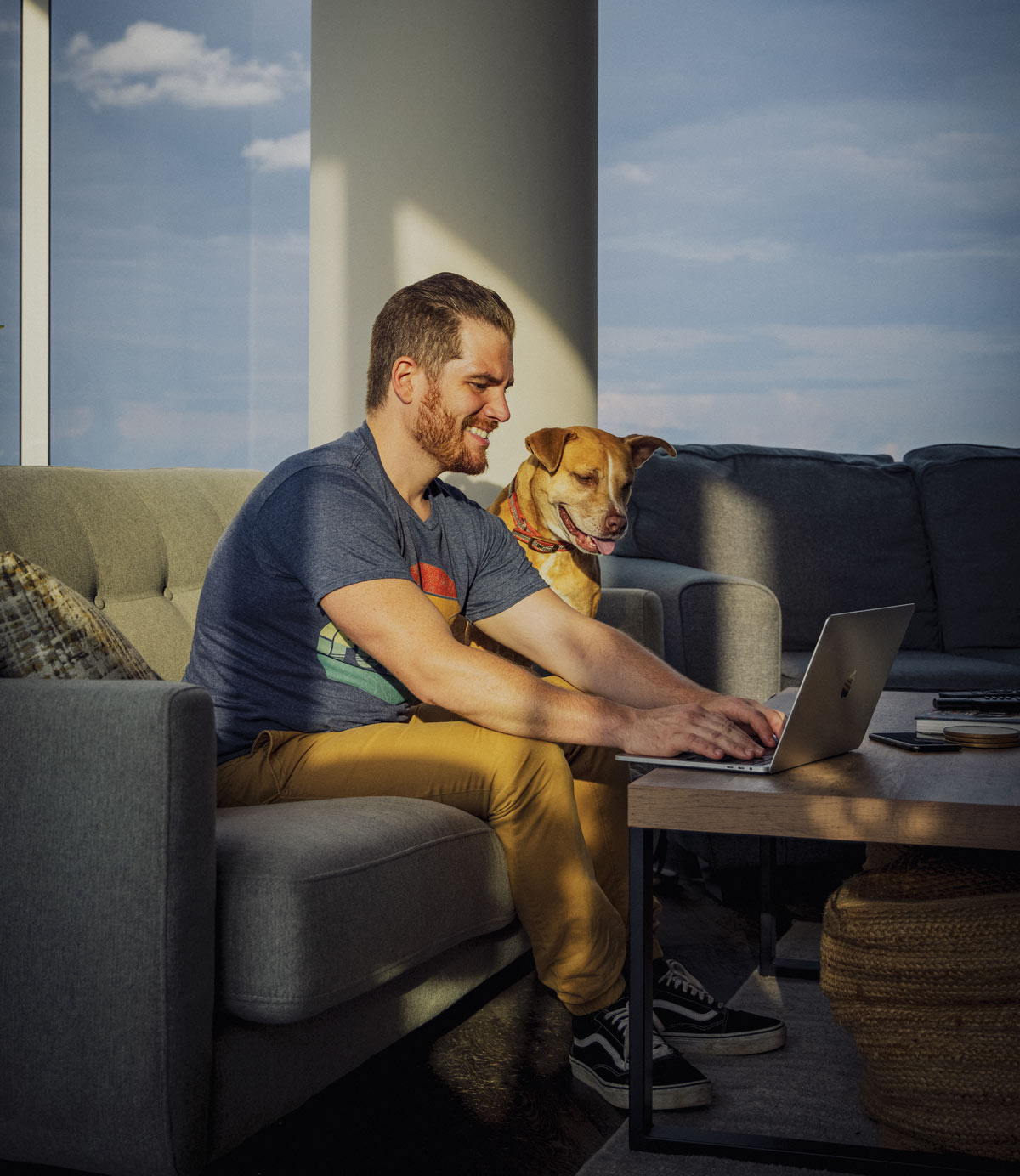 Zack Schnyder adopted Stella, nee Ranger, from PAWS Atlanta in June of 2020. “I was pretty lonely during Covid, and I had been thinking about a dog even before, so it was a perfect fit.” Schnyder was looking for a medium-sized pitbull, not too high energy, who would be happy in his Midtown apartment. PAWS matched him with Stella, and it was pretty much love at first sight. Schnyder learned later that she’d been in the shelter for more than a year, something he finds hard to believe given her laid-back demeanor and good manners. The most special moments with Stella, Schnyder says, are the little ones: when she looks over at him while he’s cooking dinner, or sits next to him while he works. “She depends on me, and that gives me some peace of mind and happiness,” he says. The night he brought her home, as she laid down to sleep in her dog bed (“That lasted a whole two days,” he laughs), he told her, “I love you, goodnight.” He adds, “The first night I just knew it. She’s my dog.” —Myrydd Wells 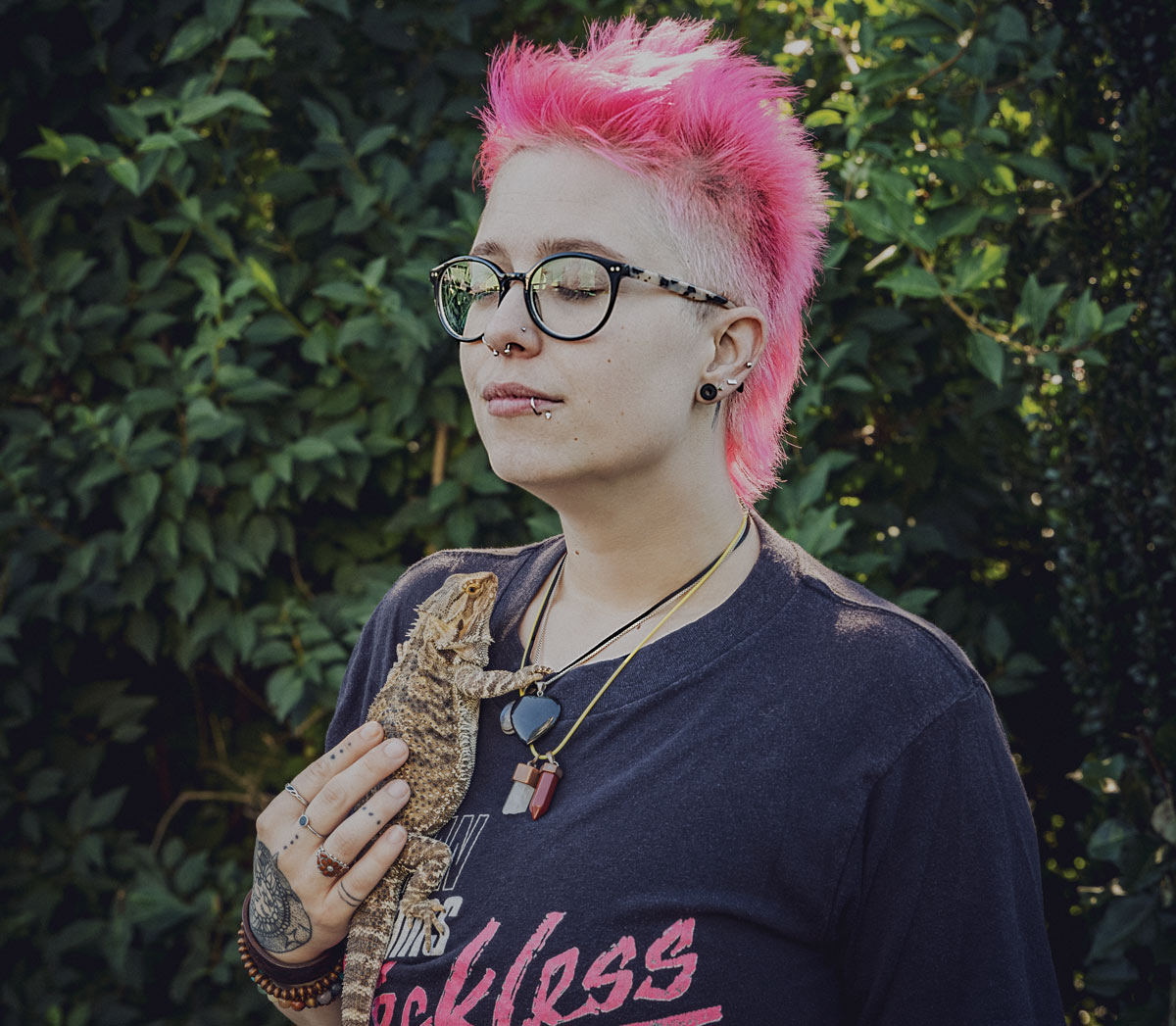 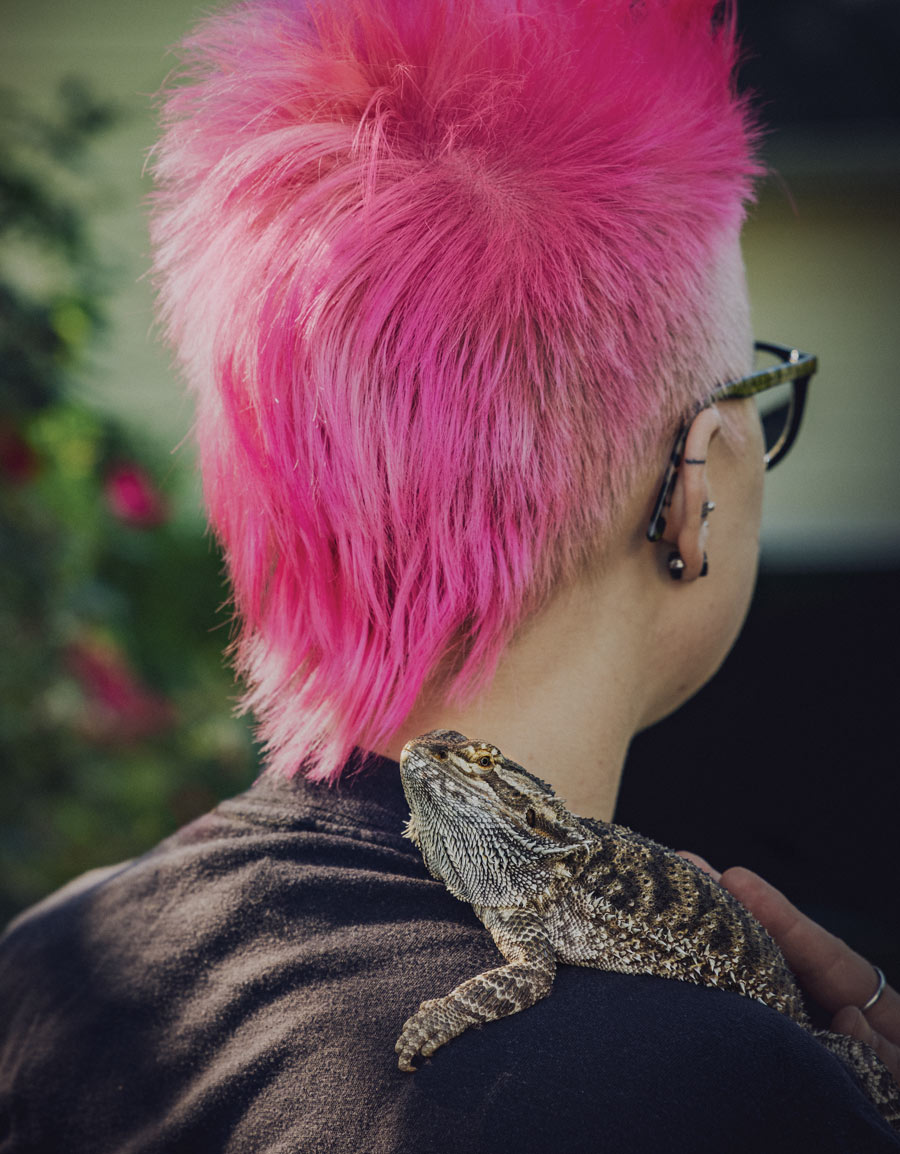 Young bearded dragons, like young humans, can go through a moody phase—and, unlike (most) humans, they can also bite. That accounts for the fact that owners who don’t know “how to deal with an angsty teen,” says Pickles Gise, sometimes surrender the lizards at around eight to 10 months. And, they say: “That’s how Zeus came to be my buddy.” They had adopted many animals in the past—dogs, cats, hamsters, a ferret—and came to be interested in reptiles because reptiles “seem to be the least loved pets.” Last September, Gise applied for Zeus, the only bearded dragon then available through the Georgia Reptile Society. Today, Zeus lives in Gise’s Douglasville home in a “bioactive vivarium,” with soil and rocks that mimic his natural habitat in Australia, and enjoys looking out the window. Zeus responds to his name and also to “kissy”—the word itself, and the sound of smacking lips. —Sam Worley 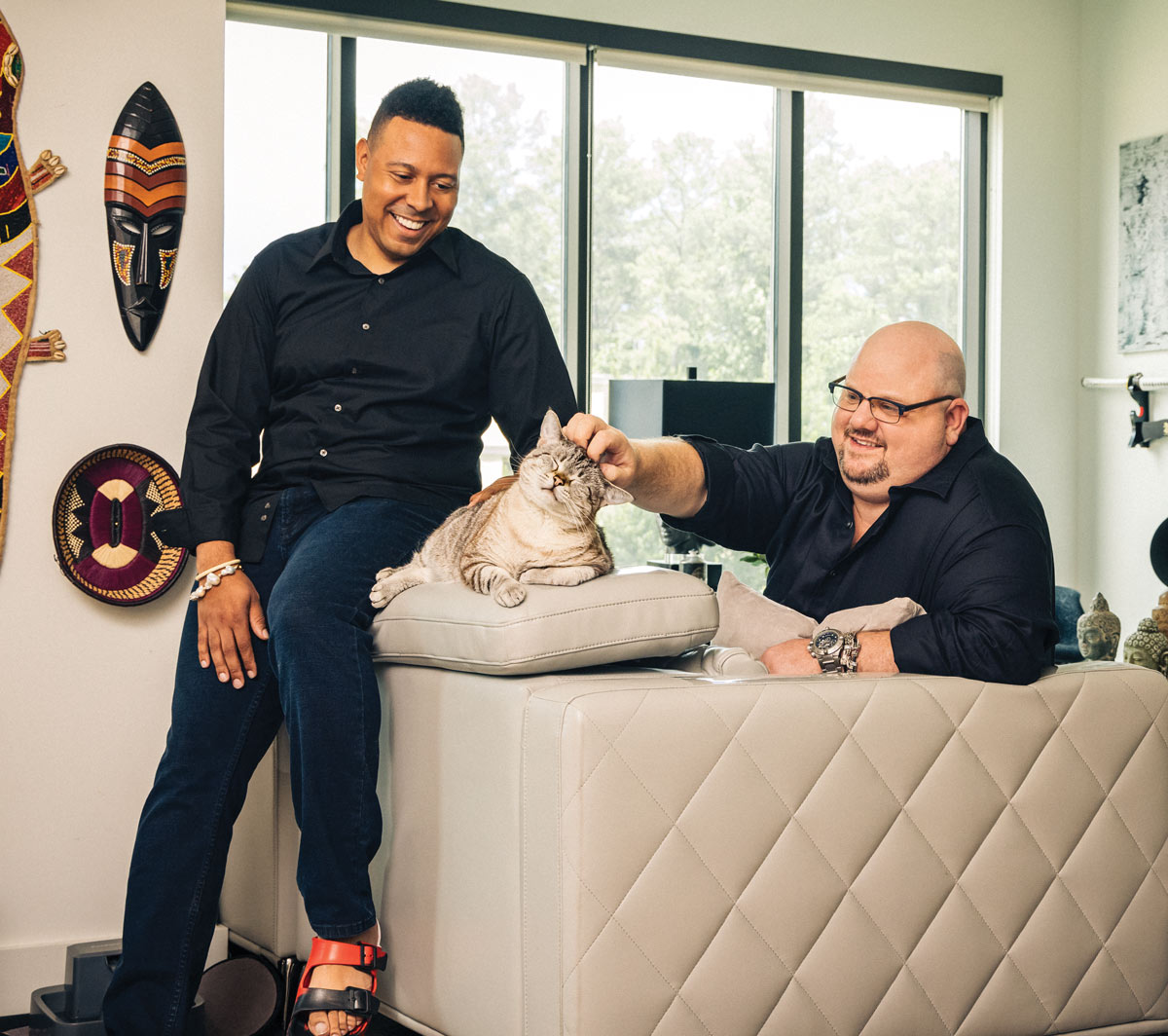 Randall McGouirk, at right, and Justin Gore adopted three-year-old Sian from LifeLine Community Animal Center in April of last year. “He came at a time when we needed him as much as he needed us,” says McGouirk. After five years together, “We’re trying to settle down and become that old couple.” Besides, both were working from their Buckhead condo, and McGouirk had tried “every craft known to mankind.” He was making soap and jewelry, planting indoor vegetable gardens, baking bread and cakes. Yes, he tried sourdough. “I probably baked 45 cakes. I have every Nordic Ware pan.” Gore suggested his partner needed something to care for and found Sian online. As soon as their application was approved, the guys flew down to the agency—McGouirk placing the PetSmart order as Gore drove. “I like to say that his story is rags to riches,” says McGouirk of their Siamese mix. “He went from the hardcore life on the streets to having a skyline view from a luxury high-rise. I sometimes call him Gladys Kravitz, making sure the neighborhood is okay.” —Betsy Riley 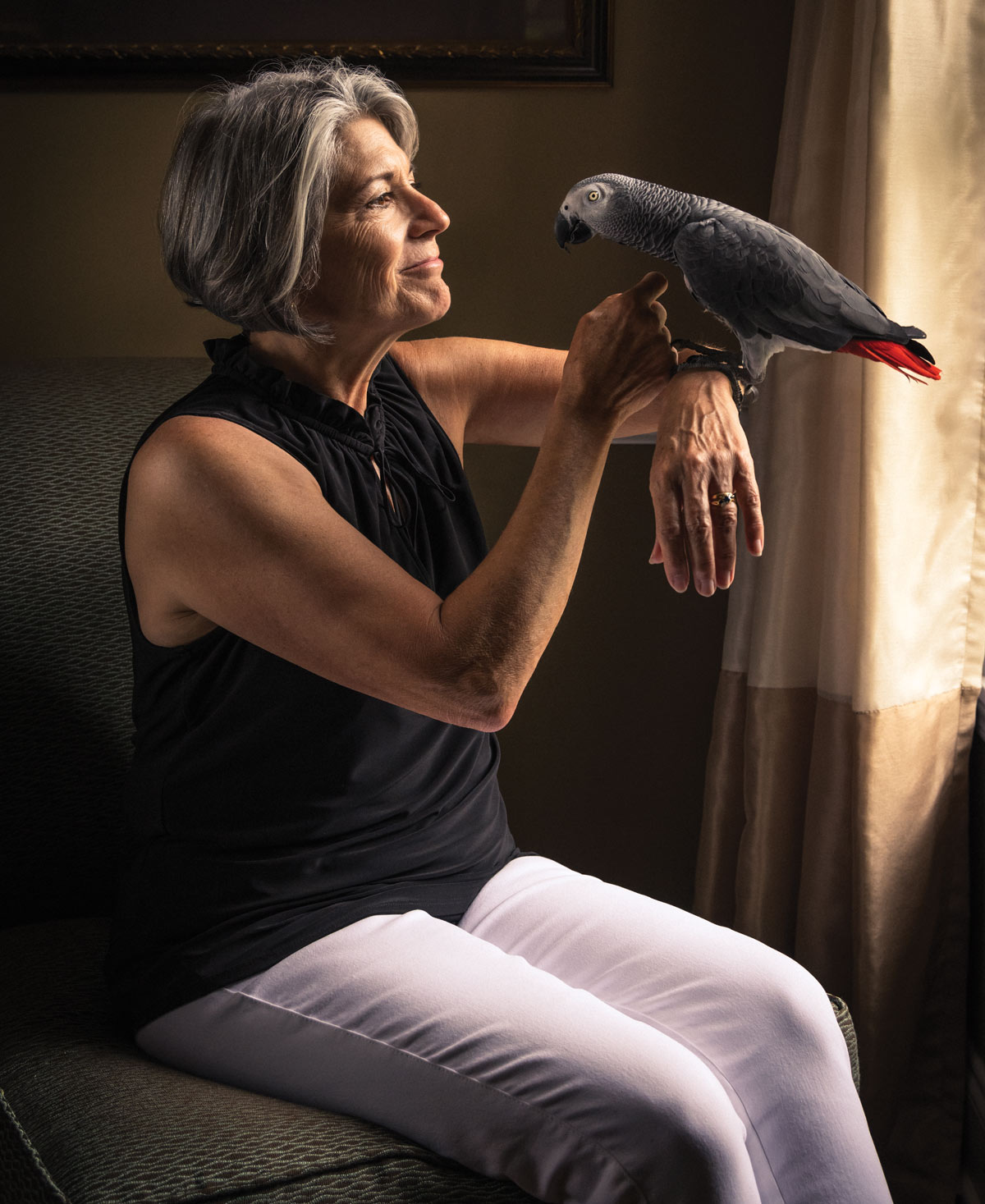 During the pandemic, DeLee Ingram’s family said goodbye to Raffi, their Congo African gray parrot, after three decades of friendship. Several months later, Ingram met and adopted Penzie, a 33-year-old parrot that was surrendered to the Papayago Rescue House, a nonprofit parrot rescue in Marietta, after his owner died. “We were a perfect match for each other and a second chance for both of us,” Ingram says. “He fills our home with laughter and joy every day.” —Thomas Wheatley 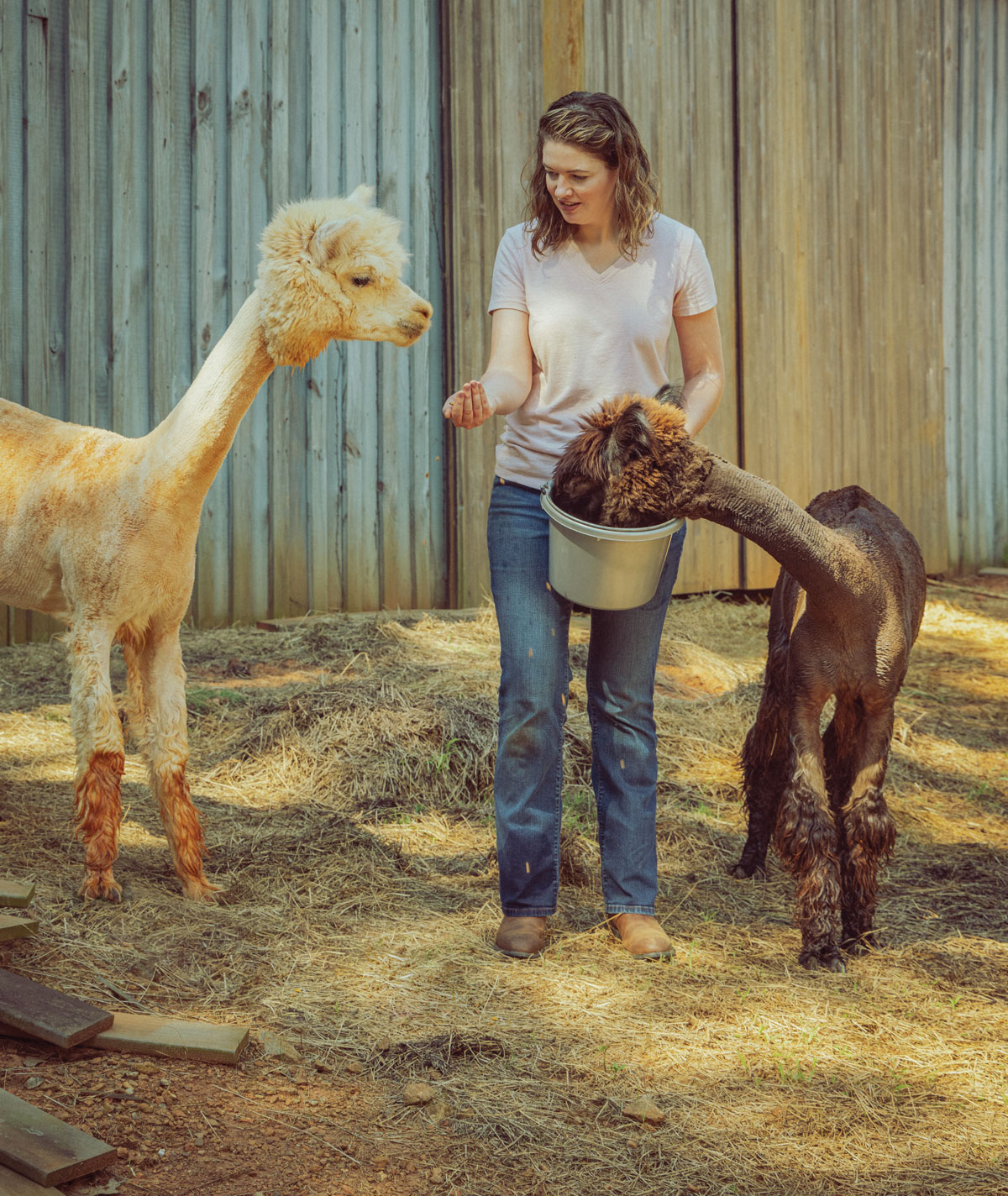 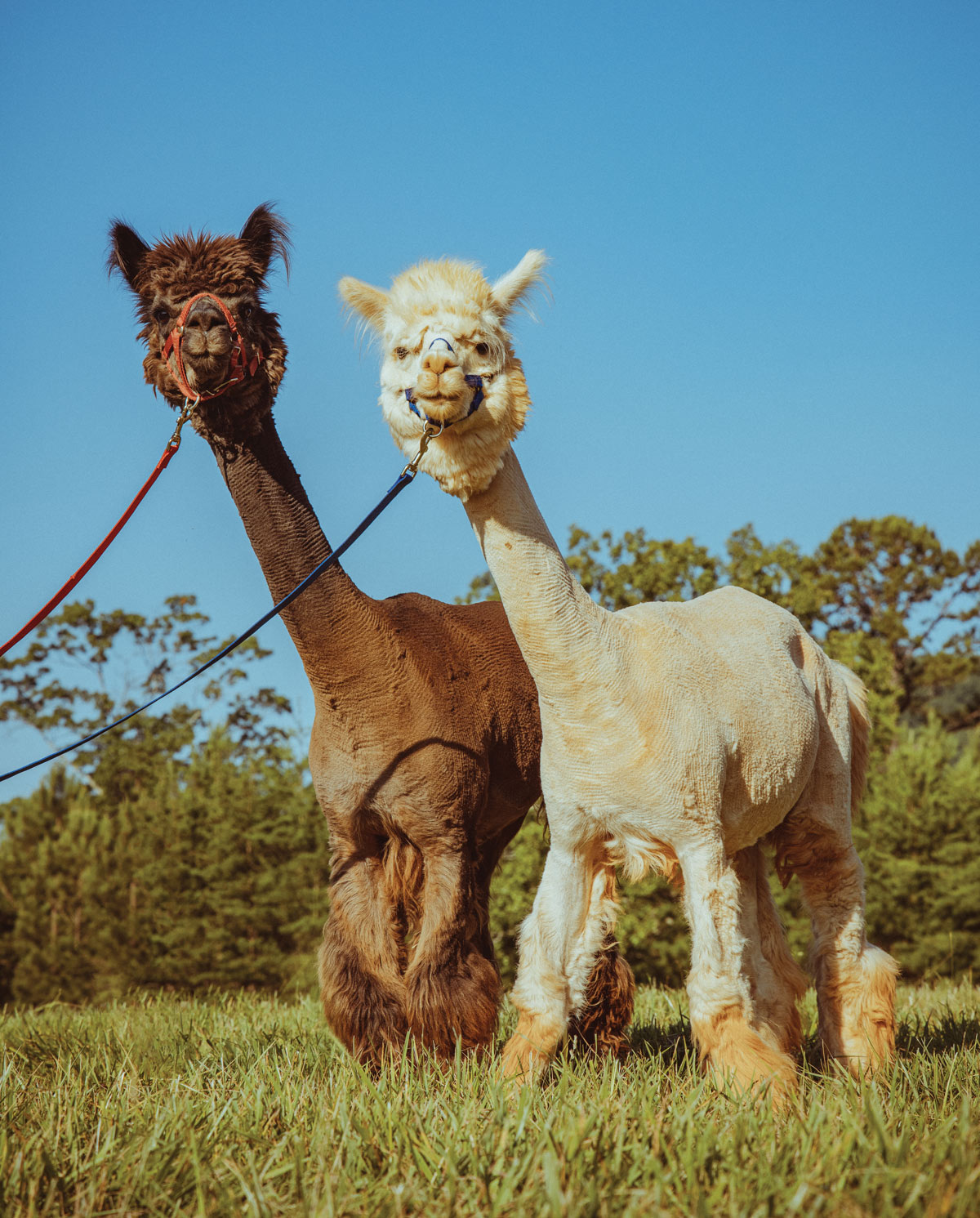 Comet and Harley the alpacas
Owner: The Atkins Family

The Atkins family first added llamas to their farm as an after-school activity for Jessica, who was just starting high school at the time. That was two decades ago. “I don’t think [my dad] ever thought it would last this long,” she says. Last year, with her aging, once 25-member herd now dwindled to two, Jessica reached out to the Southeast Llama Rescue, which offered her two five-year-old alpacas instead. So, in November, she brought Harley (above, left) and Comet (right) home to join two Great Pyrenees, four mini-donkeys, and, of course, the llamas, ages 18 and 21, for whom they’ve been perfect companions—though the elders are a little cantankerous. “The llamas I have are females, and they treat [the alpacas] like their obnoxious little brothers,” she says. But she’s amazed at how quickly the alpacas have settled into their new home: “They’re just happy go lucky. They like to go out and graze, hang out in the pasture. They have a nice little life here—very cushy.” —Heather Buckner