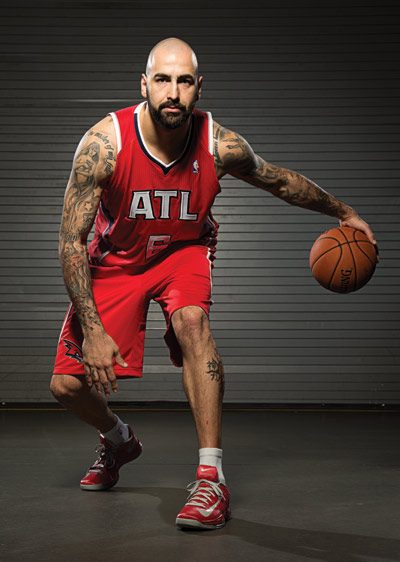 When Pero Antić steps onto the court on October 30 for the Hawks’ season opener, he’ll become the first Macedonian to play in the NBA. It’s an overdue feat, both for Antić and hoops-mad Macedonia, but sooner or later a big man from this tiny Balkan country was destined to make the leap. Macedonian, after all, comes from the ancient Greek word Makedones—“the tall ones.”

At six feet eleven, 260 pounds, with a shaved head and a riot of tattoos, Antić passes the dark-alley test of an NBA enforcer. His power forward game, however, is more finesse than brute force.

Antić’s professional career began at seventeen in Macedonia. He hopped around Europe playing for teams in
Greece, Serbia, Bulgaria, and Russia before helping Greek powerhouse Olympiacos win back-to-back Euroleague championships. Two years ago he captained the Macedonian team to a surprising fourth-place EuroBasket finish. We spoke by phone shortly before he came to Atlanta.

You’ve been playing professionally for more than a decade. Why come to the NBA now? After the two Euroleague championships, I just felt that I could still show something. I am thirty-one. I had some offers in Europe maybe twice as rich as what I will earn in Atlanta, but I don’t want to be the guy who says, “I could have gone to the NBA, but I didn’t because of this or that.” I don’t run away from things. It’s now or never.

Just how popular is basketball in Macedonia? It’s very big—it’s the main sport. In 2011 it was the strongest EuroBasket tournament in years because all the NBA players played, and we won fourth place and almost went to the finals.

And this is from a country with how large a population? It’s 2.1 million people. Atlanta is double. Half of Atlanta can just come and take our country!

What was the reaction in Skopje to your signing with the Hawks? Atlanta just signed a contract with 2 million new fans. People told me, “Finally we have a player in the NBA. We’ll have a reason to stay up late”—because the games are on at 3 or 4 a.m. “It’s going to be your fault, but I’m going to enjoy all these sleepless nights.” The president of Macedonia called me and said that everyone is so happy.

What do you think will be the most difficult adjustment? I don’t think it’s going to be difficult, but it’s going to be a little strange. Whatever you have been in Europe—you have played and won championships—that doesn’t mean anything in the NBA. You have to fight for your spot.

Do you remember who your first favorite NBA player was as a kid? Like for everybody, it’s M.J. And I like Kevin Garnett.

Who first put a basketball in your hands? My father was a professional basketball player in Yugoslavia for fourteen years.

Ah—so probably he did. We saw his medals at home—they were our toys. There was a lot of basketball at home. Then in one year I grew twelve centimeters. I was fourteen. In my mind, I just wanted to score over the older guys. Then they took me on one of the national youth teams.

How many more good years do you think you have left in your career? I think I have four to five good years. After that I will hang the shoes up and deal more with the family and try to help Macedonian basketball go higher.

You have many tattoos. What’s the first one you got? I have one on my left leg, almost on the calf, that I wanted to be a star and have a basketball and around it to have Chinese symbols. But to be honest, I only know half of them now.

I read that cars are one of your hobbies. Yeah, almost every year I buy one Ford Mustang GT. I love American muscle cars. For sure I will get something in the States and bring it back.

When you were a child, Macedonia was still part of Yugoslavia, right? Yes, but we were speaking our own language—you had to know the Serbian language, too, because it was universal.

But it’s also very ancient—Alexander the Great is from Macedonia. Yes, this is his small, great country. We have a very big monument of him in Skopje on his horse, nineteen meters high. He started everything. After he died, slowly all of it started to fall apart. But at least we are still here.

What Macedonian food are you going to miss? I will invite you to come here, to taste all the foods—everyone will love it. Moussaka, shawarma, rolled meat with grape leaves. I have to make a Macedonian barbecue for you.

So barbecue is big there, too? We arrange with families to come, and always there’s one guy who’s at the barbecue who won’t leave until he finishes.

That might be one thing in common between Macedonia and the South. In the States everyone has barbecue.

What else can you tell the fans in Atlanta about Macedonia? Macedonia is a very warmhearted country. We love everybody who comes. Macedonia is small on the map but very big in the heart.

Other Notable Faces from the Revamped Bench

Paul Millsap
The Hawks may have lost Josh Smith to free agency, but they made a terrific offseason pickup in six-feet-eight forward Millsap, one of the NBA’s most underrated talents. Playing out of the spotlight in Utah for several seasons, Millsap put up numbers very similar to Smith’s. While he isn’t a game-changing defender the way Smith can be, Millsap is a more efficient scorer, and his bargain contract gives the Hawks flexibility to fill out the roster over the next several seasons.

Elton Brand
Until injuries slowed him down, Brand was a beast. Playing forward for the Bulls and the Clippers, he averaged 20.3 points and 10.2 rebounds a game, twice making the All-Star team. At thirty-four, with a repaired shoulder and Achilles tendon, Brand knows he is now a role player—last season in Dallas was his first time primarily coming off the bench. He remains an effective post player and a pick-and-pop partner for speedy guards like Jeff Teague. He’s one of the league’s most respected locker-room guys, and the team
will benefit from his steadying presence.

DeMarre Carroll
In a Carroll highlight reel, you won’t find dazzling crossover dribbles, silky smooth post moves, or windmill dunks. What you will see is sheer exertion: floor dives for loose balls, second- and third-effort rebounds, disrupted fast breaks, deflected passes, hands everywhere. The Hawks are Carroll’s fifth team in as many years, but his unbridled hustle and his scrappy style of play have kept the six-feet-eight forward in the league and earned the respect of fans and teammates alike.