One spring evening roughly eight years ago, Corrina Sephora enjoyed a community dinner in the urban garden of the Goat Farm Arts Center, the Westside arts compound hidden one block, yet a world away, from the booming development of nearby retail like Sid Mashburn and restaurants such as Bacchanalia. The metalworker and mixed media artists saw painters, ceramicists, fashion designers—a motley crew of creatives and arts professionals mixing and mingling the same way they did every day at the 12-acre former textile mill filled with historic brick buildings, studio spaces large and small, and yes, goats, trading ideas in doorways and pooling together resources to build works of art. Cathy Fox, a longtime arts critic for the Atlanta Journal-Constitution who had launched her own online outlet, ArtsATL, leaned over and said, “We’re building something new and exciting here.”

In the following years, the Goat Farm would become Atlanta’s worst kept secret, a hotbed of creative energy, an incubator for groups such as modern dance company GloATL, theatrical outfit Saiah, chefs Zach and Christina Meloy and David Sturgis, and a go-to set for shows such as The Walking Dead and The Hunger Games. Under the ownership of Anthony Harper and Chris Melhouse, the Goat Farm was a developer that also became a patron of the arts, using cash earned from renting out its 40 studios and event spaces to offer grants to local arts groups—packages that included production assistance from its crew of dozens of carpenters, lighting designers, and artisans, plus rehearsal and event space. Attention-grabbing programming on the property generated buzz and fueled a 500-person waiting list for studio space, which meant Harper and Melhouse could dedicate their marketing budget to grants and never had an empty studio. In a city where real estate developments more often push out culture that thrives in spaces where artists can afford to live and work, the Goat Farm tried to drive a wedge in that model.

But, starting in October or November, the roughly 500 artists who build, create, and essentially live at the Goat Farm will relocate to spaces Harper and his team—Kris Knecht, Allie Bashuk, and Mark DiNatale—have located in Castleberry Hill, Old Fourth Ward, downtown, and other areas, as the property begins a $250 million transformation. The iconic brick structures will undergo renovation, but corrugated metal buildings where Goat Farm staff and tenants work will be demolished. In their place, the Goat Farm and Tribridge Residential will construct three buildings featuring ground-level artist studios and a mix of around 175 apartments and live-work spaces. Thirty-six of those units are required to be affordable but the Goat Farm, the project’s master developers, plans to offer more at below market rates.

Nearby will rise a 125-room “independent arts-based” hotel co-developed by the Goat Farm and Tungsten Partners, an early partner in the Ace Hotels brand and founder of the art publication Art Observed; two restaurant spaces; an artist-run space focusing on avant-garde and experimental arts; and a four-story building featuring microunits, work studios, and a fine art training center. The pebble-filled courtyard connecting Goodson Yard, the hollowed-out events space (disclosure: my wife and I were married there) to the studio spaces and the War Horse, the donation-based coffee shop and community space, would feature a mix of hardscape and grass. The development’s second phase would feature a commercial building designed specifically for what Harper calls a “large-footprint creative company,” like Mailchimp, and add even more artist spaces. Once complete, the Smith Dalia-designed redevelopment will total around 500,000 square feet—roughly five times the Goat Farm’s current size.

Arguably most significantly, the Museum of Contemporary Art Georgia is under contract for one acre of the Goat Farm compound and launching a capital campaign for its new Mack Scogin Merrill Elam Architects-designed home—potentially up to 28,000 square feet—along Foster Street. For MOCA GA, says Annette Cone-Skelton, that means no longer paying rent, operating in a building designed to better care for the museum’s 1,300-piece collection and archives, and being in an environment conducive for “creative moments over a cup of coffee or sitting out in one of the garden areas. The mixture of my team and the artists that have exhibitions and in those studios, it will create a natural collaborative environment.”

Under the new model, Harper says, the Goat Farm will actually have more studio spaces than it currently offers, and priced at the same rates. And the increase in density means even more revenue, which could allow the Goat Farm to double its arts grants to roughly 40 to 60 grants totaling $500,000 a year, and strengthen its artists-in-residence program. “We have a chance to illustrate that the arts can be designed into a high cost part of the city but remain affordable and program in other components to strengthen the ecosystem,” says Harper. “I don’t think we’re going to solve the world’s problems, but here’s at least one example that people can say, ‘That was designed to keep artists in a high cost neighborhood.’”

In 2008, Harper, a California native and military brat who worked as an investment banker in New York and Paris, and Melhouse, a general contractor for a large construction firm, started managing the property, long a loose collection of artist studios and workspaces owned by Robert Haywood, but at the time it housed only two tenants. When the Great Recession stifled the partners’ plans for a development on par with late 2000s Atlanta real estate—think mixed-use, medium-rise apartments or condos—the duo gambled on rehabbing studio spaces for artists while waiting out the economic downturn. They closed on the property two years later, but they decided to continue the model, and by 2015 the Goat Farm housed more than 300 tenants. To prevent Atlanta artists and arts organizations from getting pushed out by rent hikes, the team launched an experiment in South Downtown in 2015 to help those groups lease and rent out spaces to raise cash to buy their buildings. However, deep-pocketed developers scooped the buildings out from under them. The project did help Miya Bailey, an artist and owner of tattoo studio City of Ink, close on his property in Castleberry Hill earlier this year. (Harper bought out Melhouse’s share of the Goat Farm earlier this year.)

Nothing lasts forever, even arts compounds that feel frozen in time, and Harper says the plan has always been for the property to evolve, though the urgency to do so picked up as property taxes have nearly doubled in the past five years and to accommodate MOCA GA’s plans to move. For the planned restaurants, hotel, and office spaces to thrive, the 12 acres of arts and creative studios must embrace nightlife, out-of-towners, and even more workers. Harper says the new components can enhance the environment and work that takes place there. “We’re actually excited to bring more of the outside world into the ecosystem and designing it in a way that’s additive, and designed to strengthen.”

Still, tenants, 98 percent of whom have told Harper they plan to return, and even Harper, are nervous about what the Goat Farm will not just look like, but feel like, in two years when construction is expected to be complete. Atlanta has a deficit of magical spaces, and there’s a risk when changing something special that you lose the charm entirely. “I think recognizing that it could happen is probably the first step to solving it,” he says. “But we don’t have a choice really. Eventually the current version can’t afford to be there anyway. We have no choice but to figure it out.” Mensoff, who last year started painting in addition to her sculpture and metal work, understands the anxiety as well. Not too many places measure up to the aesthetic of the Goat Farm, she says. “Selfishly, I want to stay exactly where I am. This is the best studio I’ve ever had. For the big picture, for Atlanta and its art scene, I hope for the best with the next iteration.”

Correction 5/15/19: This story has been updated to fix an error in Robert Haywood’s place of birth. 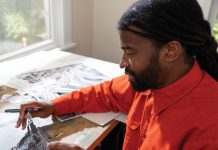 For Eric Mack, nature is both canvas and muse 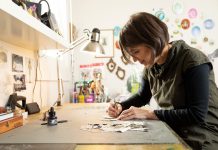 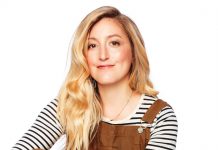