The three chapters of Bacchanalia say as much about the changing nature of fine dining as they do about the changing nature of Atlanta. In chapter one, Bacchanalia resided in posh digs in Buckhead, then the epicenter of the city’s food scene. Even before the brigade of Atlanta’s high-end restaurants (and high-end everything) began its trek toward less-exclusive zip codes, Bacchanalia entered its second chapter, boldly moving in 1999 to a repurposed warehouse in a then sleepy part of town: the Westside. It was a smart move—the area subsequently exploded in growth. In 2017, Bacchanalia began its third chapter, ditching its rarefied home for a more relaxed space even farther west. Chef Anne Quatrano and her husband, Cliff Harrison, haven’t merely stayed ahead of the curve—they’ve drawn the curve. And though Bacchanalia’s elegantly simple food—crafted with impeccably sourced ingredients (many of them from Quatrano’s own farm)—hasn’t changed much in 26 years, it’s no less influential. There’s a reason why chefs at the top two restaurants on this list worked in Quatrano’s kitchen. Bacchanalia has defined the way we eat (and where). 1460 Ellsworth Industrial Boulevard, 404-365-0410, starprovisions.com/bacchanalia 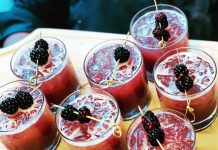