Home Uncategorized The new guard: 10 up-and-coming Atlantans who are next in line

Chris Appleton
The WonderRoot co-founder will lead the influential arts nonprofit as it moves from a modest bungalow into a 54,000-square-foot former high school.

Andre Dickens
The freshman Atlanta councilman has quickly gained clout, advocating for issues like affordable housing and wading into the ongoing APS-BeltLine dispute.

Courtney English
The youngest chair in the Atlanta Board of Education’s history, English—who has studied and taught inside APS—is advocating for a bond issue to erase the system’s pension fund deficit.

Stacey Evans
Few Democratic lawmakers have worked with the GOP as effectively as the third-term Smyrna official, whether it’s improving HOPE or helping cover tuition for technical college students.

Frank Fernandez
As leader of Arthur Blank’s revitalization efforts in English Avenue and Vine City, Fernandez will help shape the future of distressed neighborhoods near the new stadium.

Ryan Gravel
With the Atlanta BeltLine in full motion, the smart-growth visionary has launched his own civic consulting firm, Sixpitch, and has a forthcoming book.

Sachin Shailendra
The well-connected construction executive has made inroads with some of Atlanta’s top officials, landing him key appointments like the state Board of Regents.

Sara Totonchi
With the Southern Center for Human Rights entering its 40th year, its executive director is one of the state’s strongest advocates for the powerless on issues like the death penalty, private probation, and prison safety.

This article originally appeared in the October 2015 issue. 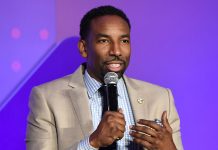 Is Andre Dickens the progressive in Atlanta’s mayoral runoff election?