Home Sports The role of the Cobb Chamber of Commerce in luring the Braves... 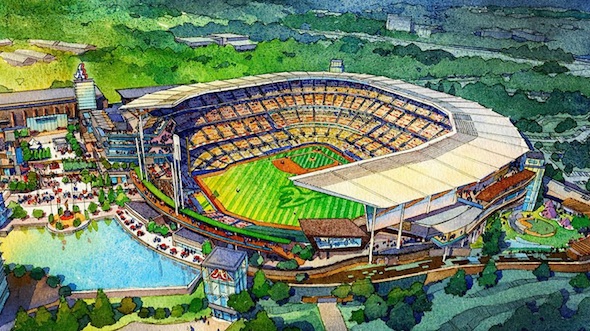 On May 27, John Loud watched proudly as a dozen speakers, each wearing one of the T-shirts he’d handed out, marched to the podium to urge Cobb County commissioners to bring Major League Baseball to Cobb. It was a carefully organized event; Loud corralled supporters to show up early, leaving no spots on the agenda for dissenting views. A few minutes later—and six months after Loud and friends had launched their Cobb Home of the Braves website—the commissioners agreed 5-0 on agreements to build and finance the team’s new stadium.

Loud’s work was done. After winning the vote, he could get back to his other responsibilities: running his Kennesaw security business; serving on the executive board of the Cobb County Chamber of Commerce; and managing ex-Chamber official Bob Weatherford’s campaign for an open seat on the county commission.

It would be difficult to overstate the role the Cobb Chamber, a 2,500-member business organization, played in bringing the Braves to Cobb, whether as public cheerleaders or private decision-makers.

“They touch everything,” Larry Savage, a two-time candidate for Cobb commission chairman and critic of the county’s $314 million subsidy of the Braves stadium, said of the chamber.

Chambers of commerce everywhere try to influence local economic development policy. But the cozy relationship between the Cobb chamber and county government has helped keep details of the Braves recruitment secret even after the deal became public knowledge. A private membership organization, the chamber does not consider itself subject to the open meetings and open records laws that govern Cobb County’s economic development staff.

Cobb Commission Chair Tim Lee has given the chamber a much more prominent role in business recruiting since becoming commission chairman in 2010, particularly when he named Brooks Mathis, the chamber’s vice president for economic development, as the county’s point man for new business prospects.

While the deal was still a closely held secret, Mathis helped the Braves pick the stadium site and sat side-by-side with Lee in negotiations with the ball club and discussions with a bond lawyer. At Lee’s suggestion, the chamber commissioned a $25,000 study, hiring a consultant recommended by the Braves, to project the economic benefits of a new stadium.

As we reported back in January, the chamber hosted closed-door briefings for county commissioners on the deal after the Braves announced their plans. Chamber officials, including Mathis, sat in on those briefings, but one participant recalled that Cobb County economics development director Michael Hughes, the economic development expert on the public payroll, was noticeably absent. Commissioners rotated in and out of the room two at a time to avoid creating a quorum and having to open the meeting to the public.

Chamber leaders played a role when other county agencies weighed in on the deal as well. When the Cumberland Community Improvement District, created by the county to allow commercial property owners to tax themselves, agreed to contribute to the stadium development, three of the five “yes” votes came from Tad Leithead, Barry Teague, and Mason Zimmerman. All are current or former members of the Chamber’s board. Two current or former board members—Jerry Nix, and Johnny Gresham—also sat on the Marietta-Cobb Coliseum Authority’s board when it voted later to issue bonds to finance stadium construction.

If opponents challenge the stadium deal in Cobb court, odds are good that the judge will have a chamber connection. Online biographies of seven of the 10 full-time Superior Court judges note their involvement with the chamber or its Leadership Cobb program. Judge Tain Kell sits on the chamber’s board; his mother, who chaired Lee’s 2012 re-election campaign, was its 2006 East Cobb Citizen of the Year.

Ben Mathis, the chamber’s 2014 chairman whose law firm paid half the cost of the economic benefits study, insisted that open-government laws apply only to private entities like the chamber in “very limited” situations. “The chamber never took on a role that effectively was a substitute for the county or any government,” he said in an email.

“It is easy for people to proclaim that the ‘public’s right to know’ is paramount in situations like this where there is great public interest,” Mathis said. “However, it is equally important to protect the right of private individuals to engage in civic activities with the assurance that their right of privacy will be protected.”

The chamber has not endorsed Weatherford, the former chamber official running for county commission, but Mathis, Loud and other past and present chamber officials gave him more than two-thirds of his nearly $28,000 in reported campaign donations.

Nor did the chamber give money to the Cobb Home of the Braves website, Loud says. Its leadership, though, was so impressed with his advocacy for the Braves and for a local sales tax for schools that he won its 2014 Mack Henderson Public Service Award in January. Last week, the chamber also honored LOUD Security as its Small Business of the Year.

Savage, the former county commission candidate who’s spoken at public meetings to question the wisdom and legality of the Braves deal, says the chamber’s pervasive boosterism can drown out opposing views.