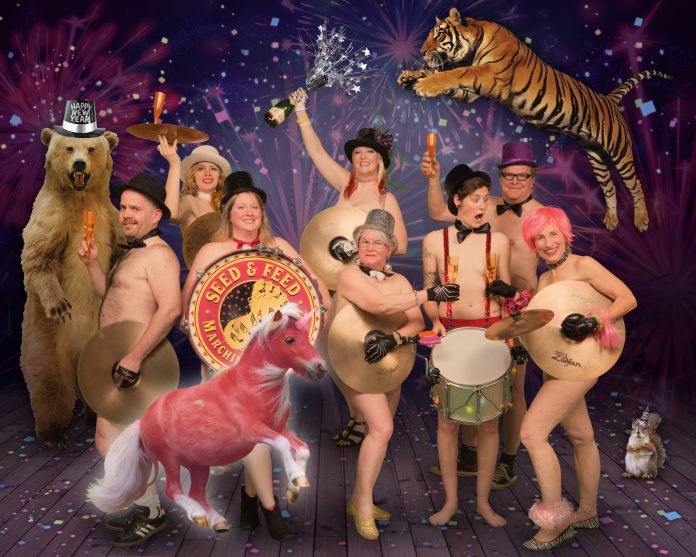 Larry Smith, who’s been a saxophonist with the group since 1978 explains: “As a joke, someone at a band meeting suggested we do a nude calendar. There was overwhelming support for the idea. You truly never know with this group! So everyone got dressed up—or not— grabbed their instruments and this is what we came up with. It’s not too racy. I mean, it’s racy for us but probably not for the public at large.”

Seed & Feed member and Decatur photographer Drew Stauss and member Katie Stockton, who is a graphic designer, donated their services to the effort (Stockton designed the elaborate and hilarious backdrops for each month after band members posed in front of a green screen). Members and stylists Brenda Findley and Sharon Braunstein ensured the less naughty bits were properly coiffed and accented for the effort.

Smith says the endowment was started to create long-term sustainability for the band. “We’ve seen some really amazing groups come and go over the years,” Smith says. “But because they don’t have any financial underpinning, they vanish. We didn’t want that to happen with Seed & Feed. We want to preserve it and keep it around forever.”

The calendars, available in two sizes ($40 for the deluxe-coated photo stock legal-size version and $30 for the standard stock 8 1/2 by 10-inch model) will be available for purchase today in front of the Little Five Points Community Center on Euclid Avenue at Austin Avenue. After today, calendars can be ordered by contacting Smith via larrycsmith@gmail.com.

Of the band’s trademark ragtag look and sound, Smith says: “We have people who have played in the Atlanta Symphony Orchestra who play with us and we also have folks who haven’t picked up an instrument since grammar school. We take everybody. We have some people who are brilliant at costuming and we have some complete exhibitionists. So it’s a bit like a Technicolor circus walking down the street. Occasionally, we have people in the band who show up in a more aggressive state of undress than is needed. So we always say, ‘remember, this is a family-friendly event. Please cover up your naughty bits.’” Hence, the calendar’s title.

And there’s a reason the marching band’s drum section kicks off the year with a risqué New Year’s themed photo. Says Smith: “Our drum section really enjoys not wearing clothes. They just showed up for the shoot and went for it.”

Fun fact: The Seed & Feed Marching Abominable’s longest-running gag, the “Wander n Die!” bit during which the band slows the music to a crawl and then sprawls out on the street was actually inspired by the band’s first-ever marching gig in the Inman Park Festival parade 40 years ago. The original members, inexperienced at parade protocol, played the entire parade route and consequently blew out their lips and developed blisters during the uphill portions. At parade’s end, the members collapsed on the ground and a bit was born.

“This year, for the new members, we actually tried to teach people how to perform the ‘Wander n Die!’ bit, which was hilarious in and of itself,” says Smith. “So yes, people can probably expect we’ll pull that out for the parade to mark the occasion.”