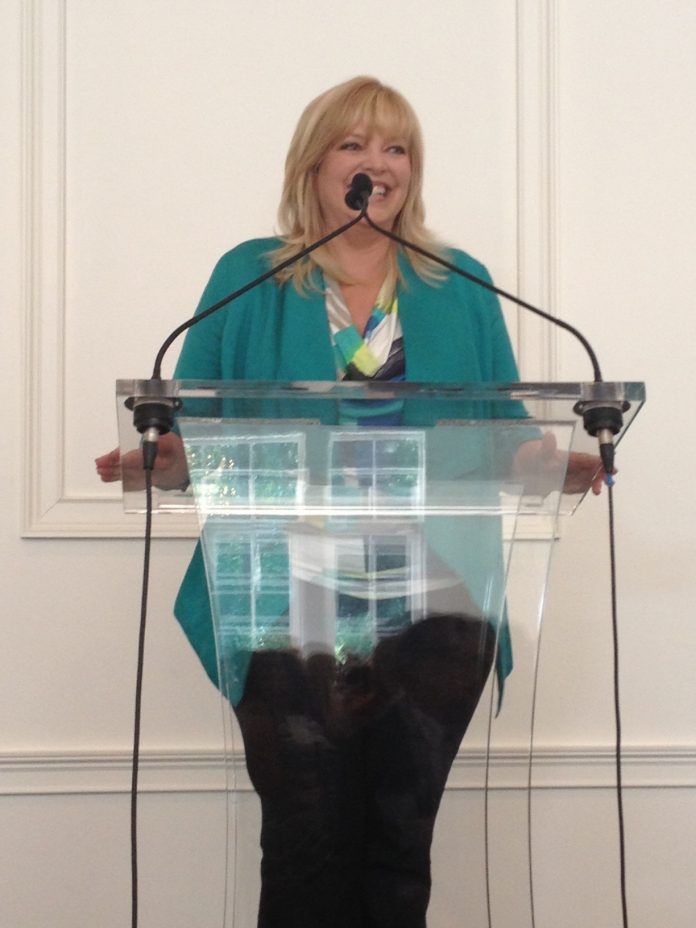 B 98.5 FM morning show host Vikki Locke’s guests at the Women in Media Luncheon at The Estate in Buckhead Thursday were too busy hugging each other and posing together for Facebook photos to reinforce the gender-based stereotypes their male bosses often affix to them.
“They always wanted a cat fight between us,” Mara Davis told the sold-out crowd at the Emerge benefit, a college scholarship that empowers women through education. Waving at legendary Atlanta rock DJ Kaedy Kiely sitting at her table below, Davis recalled, “They always wanted to pit Kaedy and myself against each other. What the guys didn’t know is that we were at Houston’s bonding over spinach dip together! There weren’t any cat fights, just respect.”

When All News 106.7 FM afternoon anchor Melissa Carter decided to leave Q100’s Bert Show at the end of her contract in 2011, she reflected on cold calling Locke, her on air competition and a radio mentor, to talk through her career crossroads. “Vikki Locke knew of me but we had never broken bread together, we had never bonded over spinach dip. But Vikki Locke spent 40 minutes with me on the phone while I’m sitting in my car in the parking lot of my doctor’s office and helped me frame out what I was going to do.”

Perhaps the most unsettling example of the obstacles still facing female broadcasters was when the 15-year veteran of The Bert Show and 99X’s Morning X got to No. 3 on her list of Things I’ve Heard When the Microphones Were Off: “You don’t have enough experience to host your own show.” Attendees gasped when Carter added: That was said to me a month ago. A man who should be helping me develop said this to me. My response was, ‘Exactly what else do I need to do to have enough experience to host my own show?’ I guess gender reassignment is my next step.”
Carter ended her remarks with this rallying cry: “The burden of change is on us, ladies. It’s not on the guys. Stop waiting on the guys to give it to you. They’re not going to. It’s not because they don’t want to give it to you but they’re not thinking about it. They’re focused on what’s in front of them, what’s profitable and what’s worked before. Let us stick together and show them that it can work.” Among the other media personalities in the room applauding Carter: TV news anchors Holly Firfer, Karyn Greer and Kimberley Kennedy.

Kicking off the luncheon in inimitable fashion was TV legal analyst Nancy Grace. She sprinted toward the podium in full high-def TV make up, fresh from one of her countless Jodie Arias exploding talking head segments on “Good Morning America” and HLN, all while clutching a BlackBerry in one hand and a bottle of Purell in the other. As the luncheon’s pre-entrée guest speaker, Grace then mesmerized the attendees with a riveting, rambling, tears-streaming-down-her-face, occasionally incomprehensible piece of what can only be politely described as performance art.