We’ve had a taste of this over the past few days, but now it’s official: For the next two months, Georgia becomes the center of the world. The state’s two U.S. Senate races are going to a January 5 runoff; the outcome almost certainly will determine control of the chamber, and therefore of the legislative branch. If both Jon Ossoff and Raphael Warnock win their races—and if two other not-yet-called contests, in North Carolina and Alaska, go to Republicans, as is expected—Democrats will have 50 Senate seats, with vice president Kamala Harris able to cast a tie-breaking 51st vote. 2020 has been a wild ride, no? Now, in the year’s final turn, that entire vehicle careens down I-75 and crashes into Georgia like a flaming dump truck.

Ossoff and Warnock will look to unseat David Perdue and Kelly Loeffler, respectively. Like the rest of the Republican Party, both incumbent senators have yoked themselves to Donald Trump, which will make the coming weeks in Georgia a kind of preview of our residual new reality: Trumpism is here to stay, but Trump is not. (Of course, that latter part will be somewhat dependent on how loudly he decides to make his exit.) What happens to the movement without its autocratic leader occupying the highest office in the land?

Up until November, Georgia’s two Senate campaigns dramatized the GOP’s fealty to the 45th president, particularly the face-off between Loeffler and Republican Congressman Doug Collins in the “jungle primary.” Loeffler—a wildly wealthy former executive at the Intercontinental Exchange, a Fortune 500 company founded by her husband, Jeffrey Sprecher—was appointed to the Senate last year to replace senator Johnny Isakson, who retired with three years of his term left. Governor Brian Kemp chose Loeffler over Collins, Trump’s preferred appointee; she is an Atlantan who lives in a 15,000-square-foot mansion, hosts fundraisers for well-regarded causes, and sits on various boards of directors. “One of the social doyennes of Buckhead,” as the Times’ Richard Fausset wrote in an October profile, noting that Loeffler’s selection was “widely interpreted as an effort to make the Georgia Republican Party more palatable to middle-class moderates, especially educated women in the Atlanta suburbs who have been abandoning the party in the Trump era.”

Ah, but 2019’s hopes comes to dust in 2020. Loeffler moved quickly to dispel notions that she might be any sort of moderate, proclaiming herself “a lifelong conservative, pro-Second Amendment, pro-military, pro-wall, and pro-Trump” and spending the intervening year demonstrating just how much she means it—particularly that last part. With Collins vying as her equally conservative opponent, the contest turned into a race of bitter one-upmanship. Collins announced he was going on a “Trump Defender Statewide Tour” in his “family Suburban, trailed by volunteers in a 15-passenger van that runs on liberal tears.” The central scene of Fausset’s Times piece is set in a Dalton brewpub, where Loeffler appeared in August alongside Marjorie Taylor Greene. Just elected to the U.S. House, Greene gained a lot of attention for her association with the QAnon conspiracy theory, and a little attention, too, for her apparent belief that 9/11 was an inside job. Greene has since clarified her position: “Some people claimed a missile hit the Pentagon,” she offered, in a tweet written August 13. “I now know that is not correct.” You live, you learn!

Greene is all the way through the looking glass; Loeffler dove in behind her—they appeared together in September, for instance, at a rally surrounded by militia members carrying assault rifles—and was rewarded with Greene’s endorsement. Loeffler has resembled less a moderate candidate than a right-wing Facebook feed come to life, stoking paranoia over fake news. She described Warnock, himself a pretty moderate political actor, as “the most radically liberal and extreme candidate running for Senate anywhere in the country,” while comparing herself in a series of commercials to Attila the Hun. She locked herself into a public dispute over Black Lives Matter with players on the Atlanta Dream, the WNBA team that Loeffler—now somewhat awkwardly—co-owns. In an open letter, Loeffler averred that BLM “called for the removal of Jesus from churches and the disruption of the nuclear family structure,” which—huh! She has also called it a “dangerous Marxist movement.”

A recurring theme of the Trump phenomenon is the doling out of a kind of ritual humiliation, which his fans seem to crave, and which bludgeons just about everyone the president has contact with. Mitt Romney was an early target; Chris Christie had several turns in the barrel. Various people have gone to prison as a result of their service to Trump; Herman Cain literally died of COVID-19 after making a point of not wearing a mask (his diagnosis came nine days after attending an indoor Trump rally), suffering thereafter the considerable indignity of being outlived by his own Twitter account. Few have demonstrated their loyalty as intensely as Loeffler, which didn’t escape the notice of her opponent Collins. He portrayed Loeffler as a “phony” conservative, “about as comfortable as a vegan at a steakhouse,” as a flack put it to the New Yorker’s Charles Bethea. But boy, Loeffler has really put her back into it. When she said that she didn’t disagree with the president on a single issue, a CNN reporter asked if that extended to the remarks he’d made on that infamous Access Hollywood tape, bragging about sexual assault. “I’m not familiar with that,” Loeffler said. It certainly captured the mood of the moment, or a mood, anyways, in its combination of absolute fealty to the leader with the denial of a reality that anybody can plainly see. Trump might’ve approved, though he’s done little to acknowledge Loeffler’s efforts; for instance, he’s never tweeted about her.

But what now? Perdue failed to decisively defeat Ossoff, so that race continues. Warnock gained a plurality, though not a majority, in the jungle primary, and now faces Loeffler. Combined with the outcome of the presidential election, those results are a testament to the many activists working to increase voter turnout in Georgia and beyond. They bear out the case Stacey Abrams has been making for years, which is that Georgia is not necessarily a majority-conservative state—it’s just that historic and systematic suppression of voters, particularly Black voters, has helped make it look that way. As Nse Ufot, the organizer who leads Abrams’s New Georgia Project, put it in a recent interview: “The Confederacy and the civil rights movement both have claim to Georgia’s past. Right now, what we are all living through and witnessing is a fight for Georgia’s future.”

Speaking to CNN last month, a GOP strategist said Loeffler’s exuberant embrace of the far right would be “devastating to her in a runoff.” Her schtick has been so extreme that it’s hard to see much possibility of her moderating it to make herself more palatable to a wider Georgia audience even if she wanted to. She may not want to—Trump has demonstrated that there is a reward for a strategy of this kind. Loeffler winning the runoff would be a validation of that strategy, proof that it will still be viable. A win for her is a consolation win for the outgoing president and his larger-than-predicted base.

Of course, so much of that strategy has been wrapped up in the singular figure of the president; many conservatives will now seek to grab his mantle, but who knows how much they’ll succeed. In a sense Loeffler isn’t all that dissimilar from Trump—another wealthy cosmopolitan who has little in common with the people who support him. In an alternate reality, neither of them would be caught dead chatting up conspiracy theorists in a Dalton bar. On some level their constituents must know this, even admire it. But Loeffler lacks Trump’s potent charisma.

Without it, what’s left? If either Loeffler or Perdue retain their seats, keeping the Democrats from reaching a majority, they won’t have to do much of anything: The Republicans’ prize will be the ability to block Biden from any meaningful action, at least legislatively, on the direst problems of our time, particularly the pandemic, racial inequity, and the climate crisis. The remainder of the 2020 election will continue that test of competing futures: whether the ascendant and, as of today, razor-thin Georgia majority can overcome the dystopian longings of the Trumpist crowd, who’ve left themselves no room for moderation.

And what if Warnock and Ossoff do both prevail, against what seem like considerable odds? The more sober elements within the Republican Party—the tax-cut set rather than the pure culture warriors—may use it as evidence in a case for their continued relevance. The Trumpists, or whatever we’ll be calling them next year, will make that a hard argument, given what we know about the broad sympathies of the party at large: The Republican electorate, after all, never abandoned Trump. And the recent journey of Loeffler, for instance, suggests that some of the tax cutters and the culture warriors were never all that far apart to begin with. Which is to say that a Warnock and Ossoff double-whammy will be an early and important indicator of whether Republicans, in the aggregate, become humbled or fractured without their leader. It is against the nature of Trumpism to accept defeat. Will it be against the nature of Republican voters to reject Trumpism?

Without a challenger from the right, Perdue hasn’t been forced to undertake the same kind of theatrics as Loeffler, though he gave it a shot with his performative mangling of Kamala Harris’s name at a Trump rally in the waning days of the election. He’s been a steadfast supporter of the president’s since the beginning—like both Trump and Loeffler, Perdue is a wealthy self-styled political “outsider,” and he has been called Trump’s “man in the Senate.” For as seemingly effortful as Loeffler’s Attila act has been, it’s an open question whether it represents a stretch for her, or if it’s really more of a revelation, in the way that Trump hasn’t transformed the Republican party so much as he’s just stripped off the drywall and revealed what’s holding the house up.

Loeffler’s mansion has a name—Descante—and when she and her husband purchased it in 2009, for $10.5 million, it was the most expensive residential real estate transaction in Atlanta history. Descante was described in Buckhead.com as “a $10 million work of art built to showcase other works of art,” including a number of pieces by Jean-Michel Basquiat. Perdue likewise lives in gated opulence; his home is Sea Island, a luxury development across a causeway from Saint Simons. With six feet or more of sea level rise, that causeway and the land it leads to will be mostly underwater by the end of the century. That, among many other things, could well be the cost of Loeffler’s and Perdue’s return to the Senate. 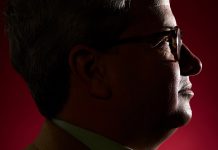 Gabriel Sterling on death threats, the Dark Side, and America’s redemptive potential